I would be lying to everyone if I didn't confess to being completely infatuated with the Royal Wedding taking place this Friday. I was eight years old when Lady Diana Spencer married Prince Charles, who I still to this day think is not handsome at all! He really was the winner in that marriage. It was like a fairytale that every little girl dreams of as I watched it on TV. My mom woke me up early as we both sighed over the frilly dress & cathedral length train. Only now as an adult do I look at the footage & say to myself "what was she thinking, with that dress?". I know for the early 80's fashion it made sense but I sure hope Kate chooses a more modern sleek look for all our sakes . Here is a quick couple of pictures to remind you just how much dress Diana wore that day. I know that a few of my readers weren't even born but that day was HUGE & one I'll never forget. 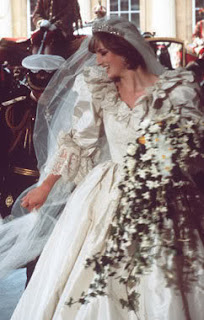 As Lady Diana got out of the carriage I remember everyone was upset that her dress was wrinkled. Well DUH??? You stuff her into that glass case literally in all that dress, I mean the veil was 26ft long. I admit I watched a little POP-UP TLC Royal history show last night for a couple hours. I remembered it was the longest Royal Train ever at 25ft , but really just found out how long the veil was last night- Thanks TLC. I know the only thing I saw when I was eight & watching was a "Princess", even though she wasn't yet until after the vows called Princess. I loved all the Pomp & Circumstance . I thought she must be the luckiest girl on earth to get her Prince. We had no idea then what we all know now, it was a Lie. So glad we had no idea so I could live out the magical fairytale that day. I now know it probably influenced my choices for my Wedding day to my handsome Soldier. 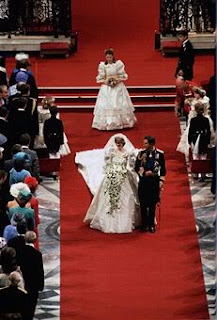 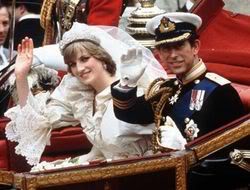 If Paul & I could have driven away in a carriage pulled with horses I so would have on our wedding day. Kind of hard to do in a January snow storm of the year. Here is a quick picture of us getting out of our limo at Opryland Hotel for our reception- see any similarities to me getting my "Prince" ? 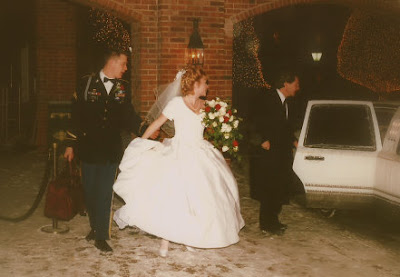 Yes, I snagged my Prince/Soldier & am super excited to watch Kate marry her's on Friday.
I haven't decided if I will DVR the wedding, I am HUGE fan of DVR now days. I am not as young as I use to be & have no girls interested in watching the wedding with me.  I may not be watching this time LIVE like I did as an excited eight year old girl who still believed in storybook weddings, fairytale Prince & Princesses ,& happily ever after,but I WILL be watching. It will still appear magical to that little girl inside of me I know. I also know I am so lucky that I still get to get dressed up 15 years after marrying my Prince. I still get butterflies when he is in his uniform and we are heading out for the evening. I know that my Happily Ever After is happening right now & I am so thankful for that. 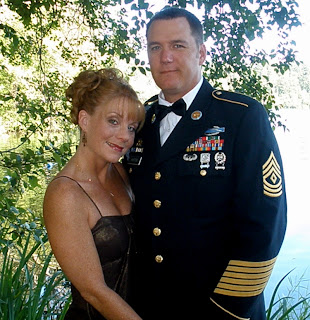 The love of my life still looking so handsome after all this time. 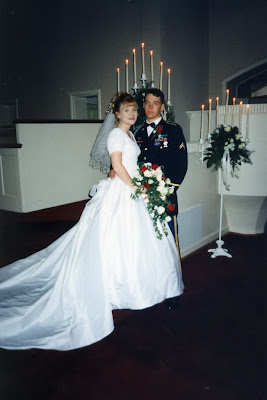 Do you see the similarities......I had my own Fairytale
Posted by Amanda at 7:32 AM

I am excited to see what Kate's dress will look like. I was born just after the wedding but I have seen footage from it. I don't know that I will watch the wedding but I do have it set to record so that I can fast forward through the boring parts :)