Yesterday I learned that our dog trainer from Island Grove Kennels of Limestone, TN had given Balto his Public Access Test on Sunday January 19th. We had no warning or knowledge that he was going to do the testing. We knew from prior conversations that he thought Balto was ready but we weren't sure when he would make the decision to test him. The wonderful CEO's from 1 Boy 4 Change  were in town dropping off some dogs for training so he decided this was the perfect opportunity to show off what Balto's strengths as well as weakness's were. A young eleven year old boy had stopped by to ask about training classes for his own lab so James the trainer asked if he would mind helping. The young man went along with the request and was handed Balto's leash. Balto is now over 80 pounds and 15 months old. The young man had never laid eyes on Balto before which is a HUGE deal. 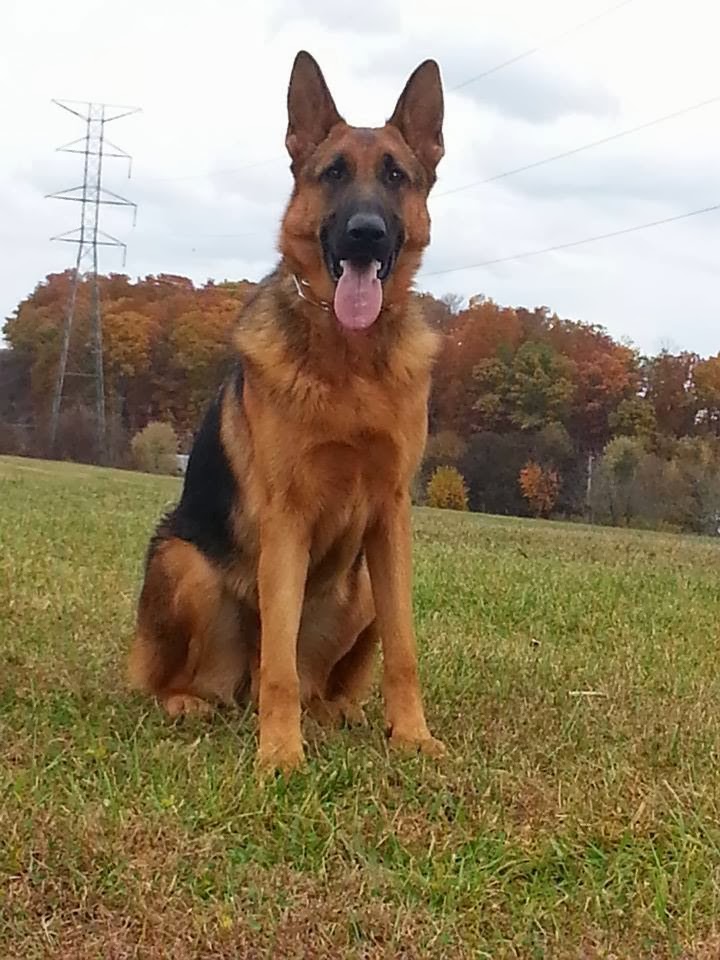 Not many kids I know would be okay just taking the leash of a German Shepherd who looks as big as Balto . Thankfully this young man did just that & listened to James. He ran Balto through all the required elements of the test so that Janet & Chris could see him at work. What we heard from them was he was "Fabulous", " passed with flying colors", & " Amazing Job!". I just can't even begin to tell you how relieved I was at this news. It's probably a great thing I had no idea ahead of time they were going to be doing this testing. I have been a wreck about Balto being okay around children that are small like Jeremy. Before he left he was not happy about them jumping around or approaching Jeremy. James had told me this was a stage that if corrected early would be resolved. But after losing one service dog in training I was just a nervous mom.
But now Mr. Handsome hear has proven us wrong & can now be called Service Dog Balto!! 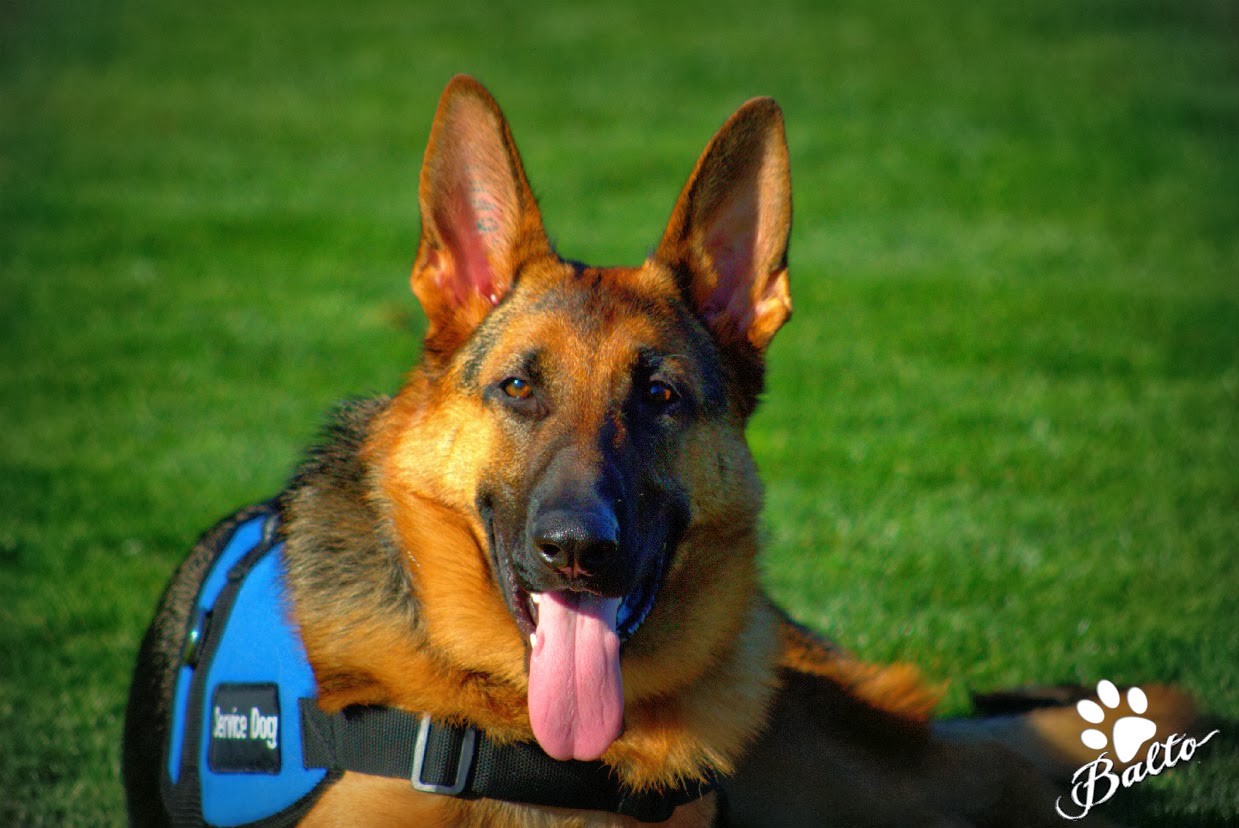 This DOES NOT mean that his training is over. He is still very young and has much more training to accomplish. What it does mean is that he has proven on Sunday as well as many other occasions that he can behave with manners out in public. No service dogs are required to pass the PAT or the CGC , but our organization as well as our family think this is extremly important. Not only does it speak well of service dogs who behave properly out in public it means I can have no fear or worry when Jeremy is in charge or left alone with Balto that he won't listen. We will travel to pick him up in February from TN and we can hardly wait! We have some training to do there so that Jeremy & I can learn any new commands he has learned. Also so that Balto can be reminded that Jeremy is his responsibility & who is in charge. Once we return home we will give them a week or so to adjust to their new schedules. Balto won't just jump into going to school with Jeremy full time. We will do drop off & pick up as well as see if we can sit in on classes some to get them both use to the routines. Balto & Jeremy will also go back to attending some form of obedience class to keep up with Balto's training . He also will take his Canine Good Citizens test with Jeremy as the handler. Once again this is not required but I think a good choice so if ever there comes a time we need to we can say that he has had a lot of training done the work & passed.

We are just so thankful to everyone who has followed along on this crazy roller coaster ride for the past two & a half years. The heart ache of losing Banyan as well as the joy of receiving a second chance with Balto. We know in our hearts that Balto & Jeremy are meant to do great things together. We will continue to work and support them to make them a successful Service Dog team. We enjoy all our friends on Facebook we have made through this process and can't wait to continue to share Jeremy's Journey with everyone as they continue on into the future. Thanks for being a part of this, thanks for your kindness, love, & support. Now here are some fun pictures & videos to show just how far team Jeremy & Balto have come. 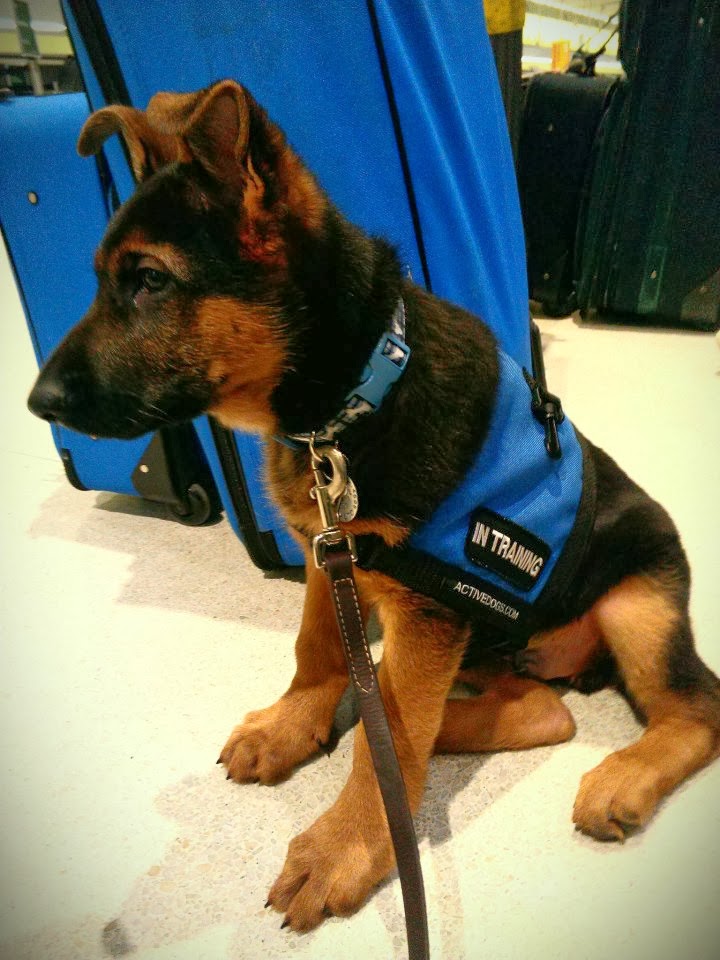 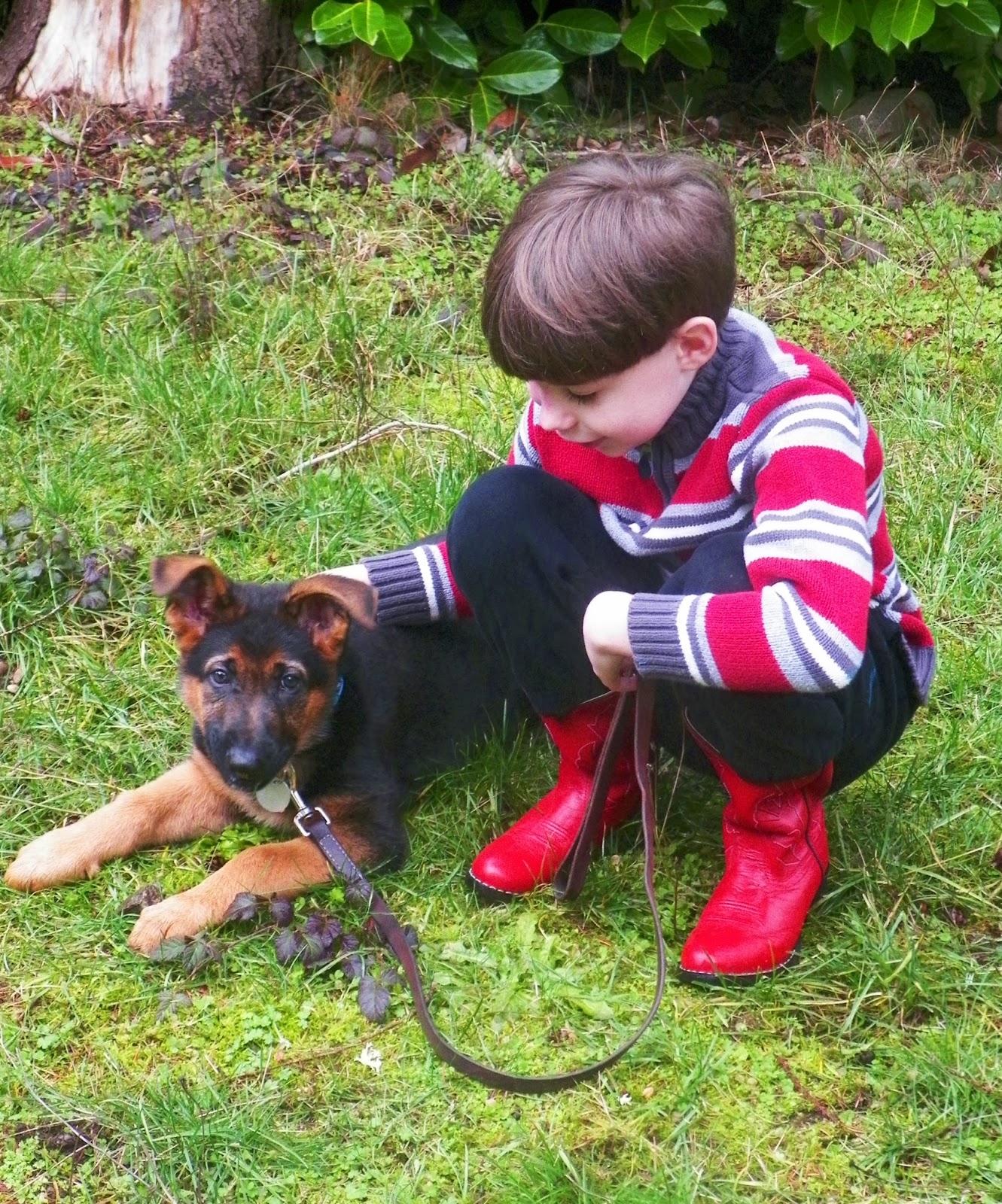 Meeting Jeremy for the first time 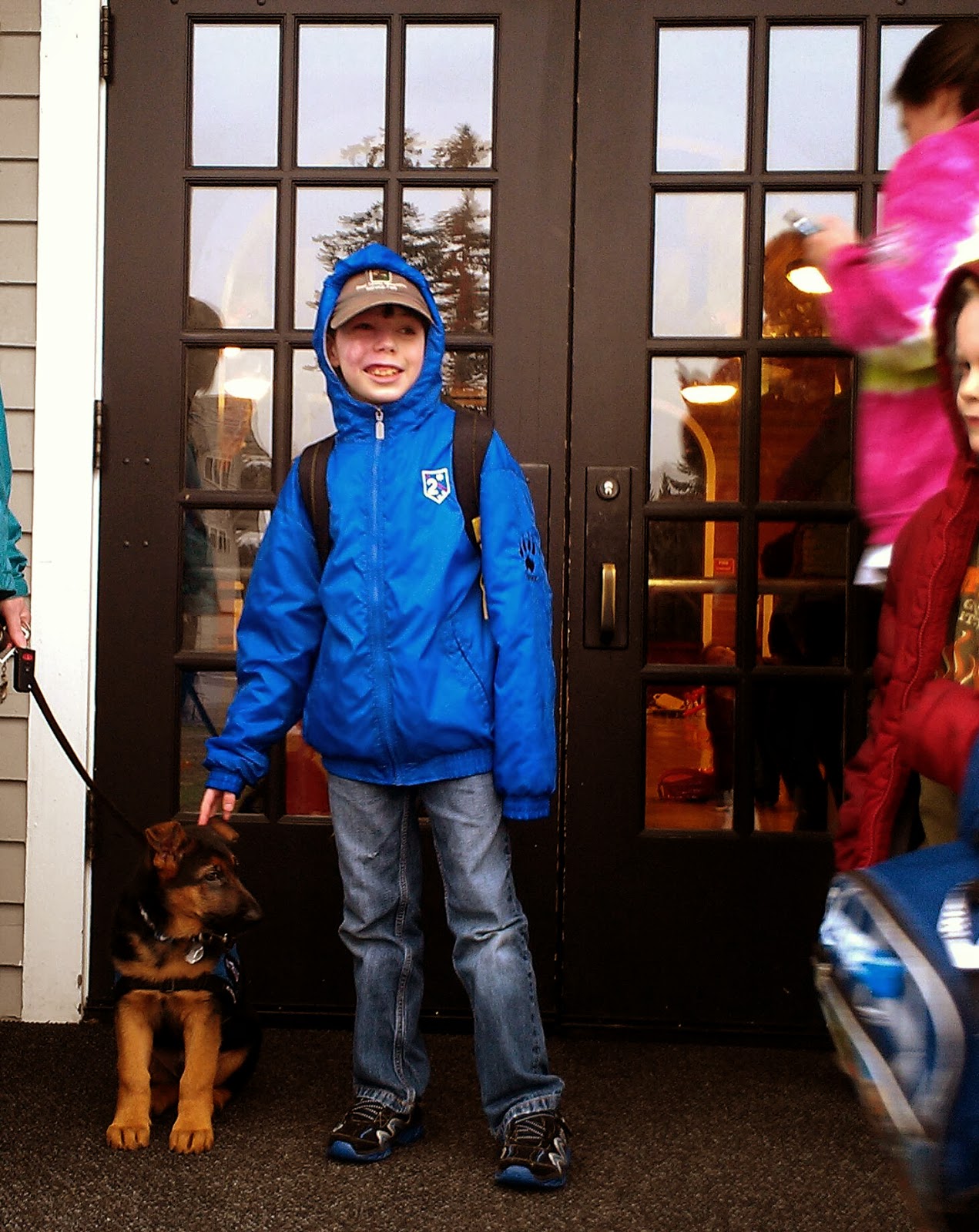 Picking Jeremy up from School 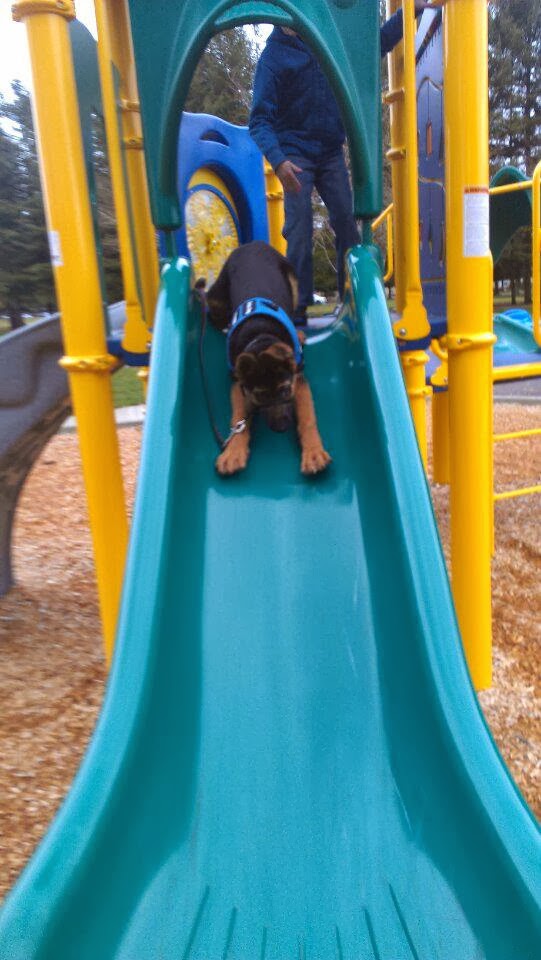 Training can be FUN! 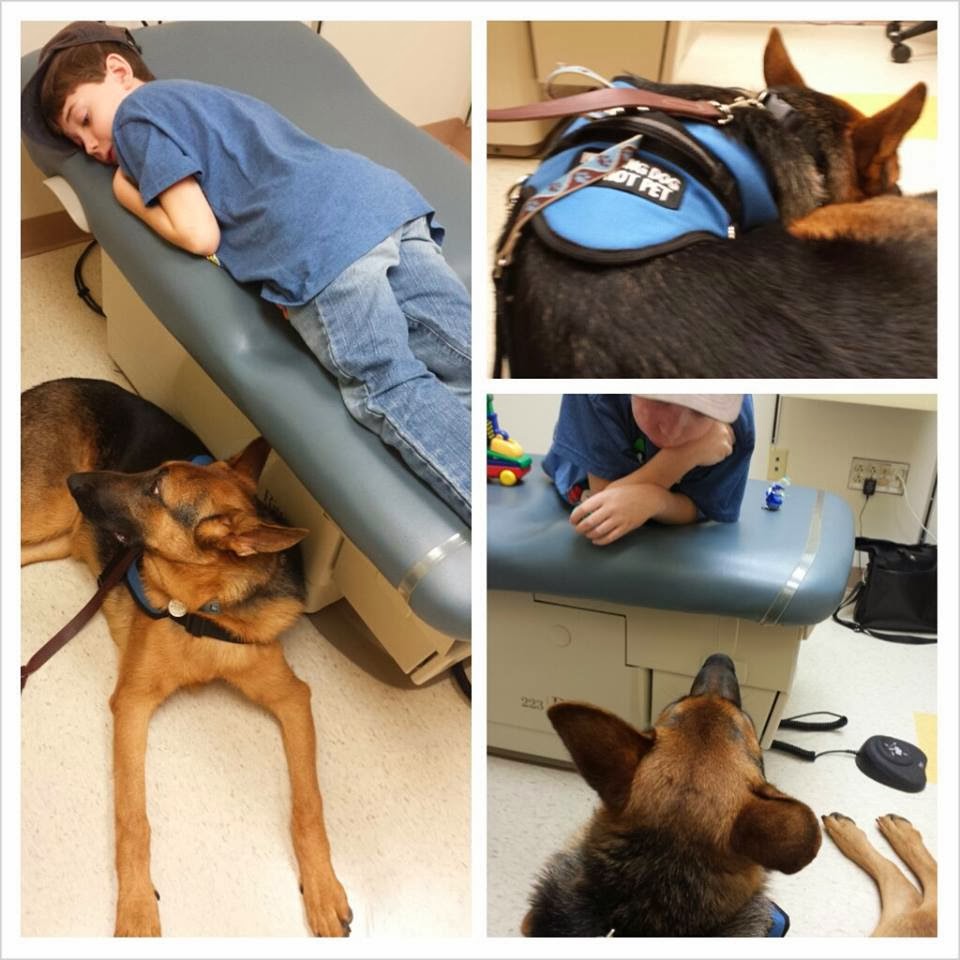 Going to appointments with Jeremy 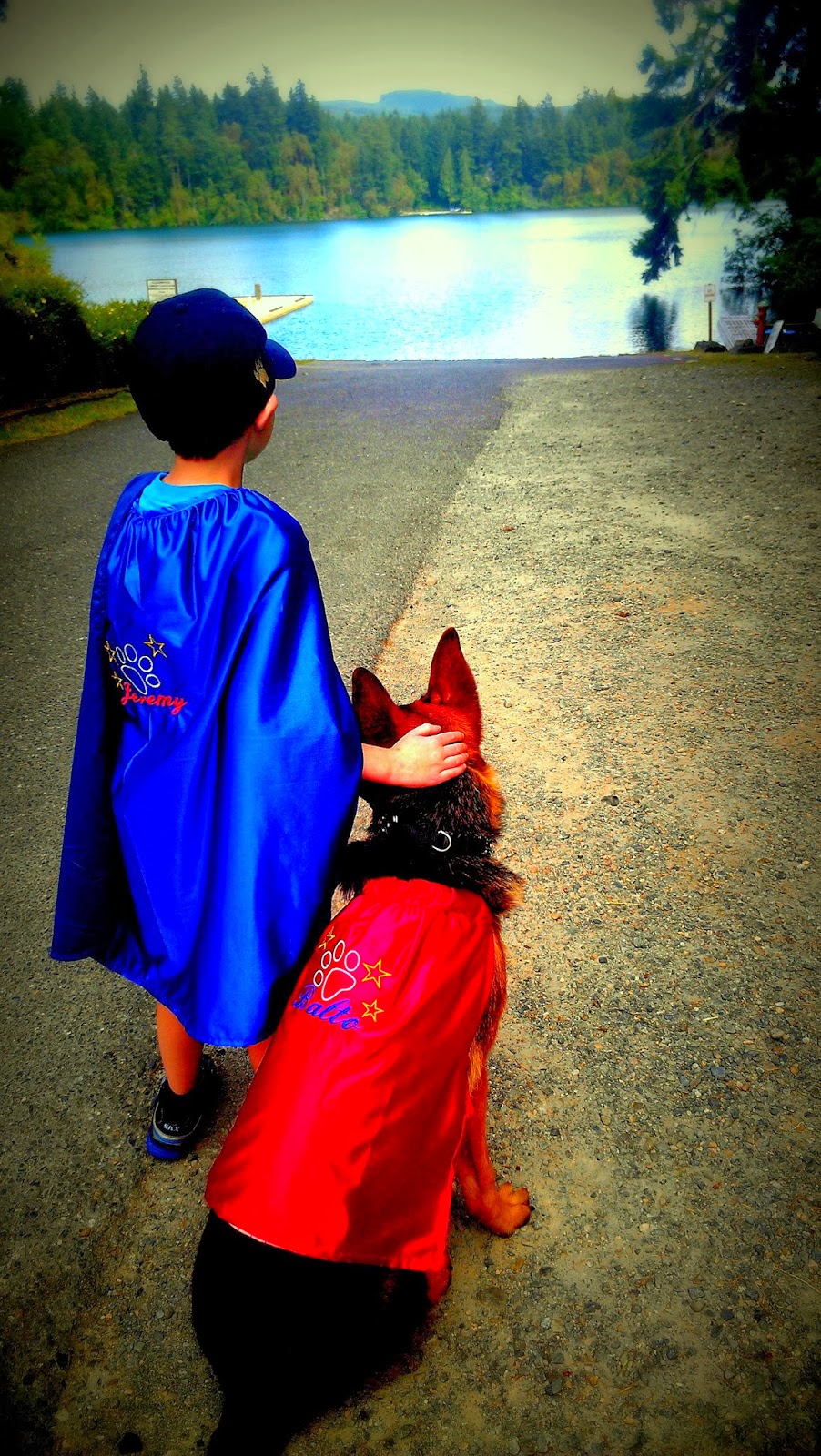 Taking walks in our cool superhero capes together 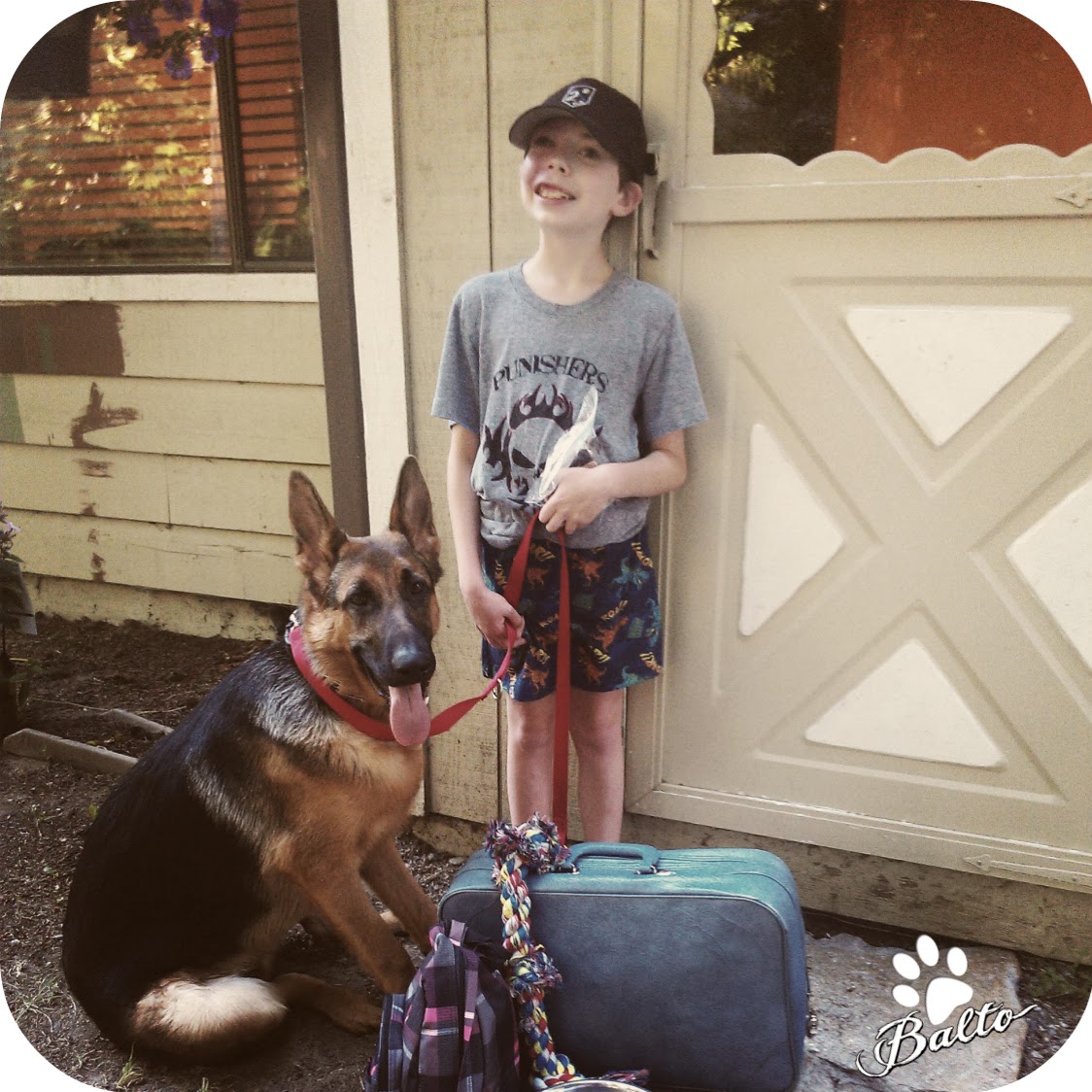 Going on our first sleepover 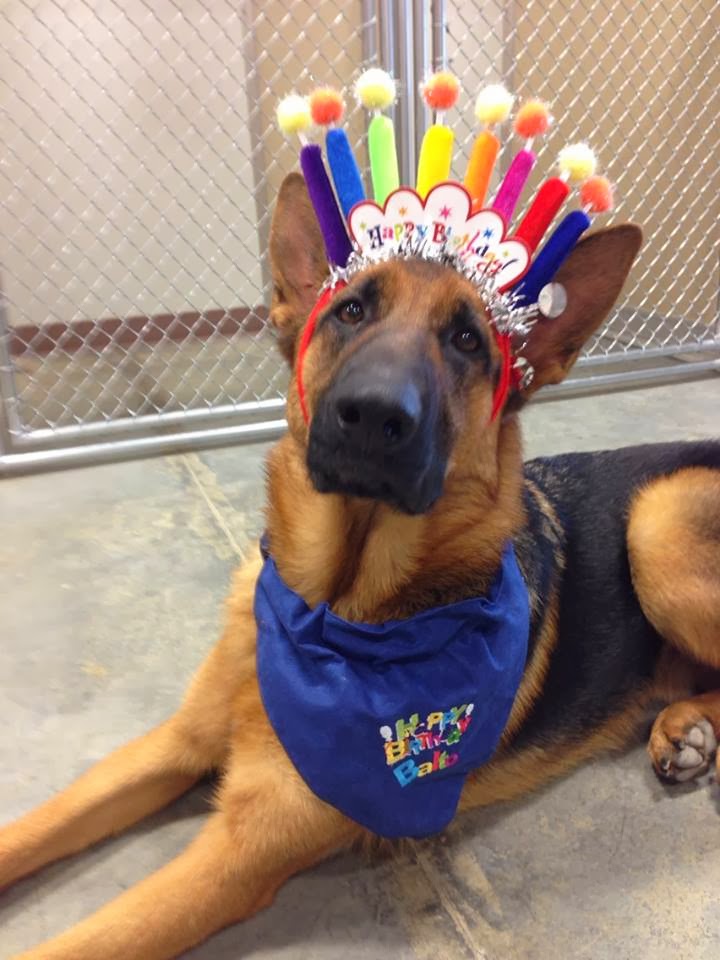 Celebrating my 1st birthday, letting them make me look silly.....

These are just a few fun moments captured in time over the past 15 months of training. We can't wait to see how many more wonderful memories we can make.

Jeremy missing me so he called, being away at training can make my boy lonely. 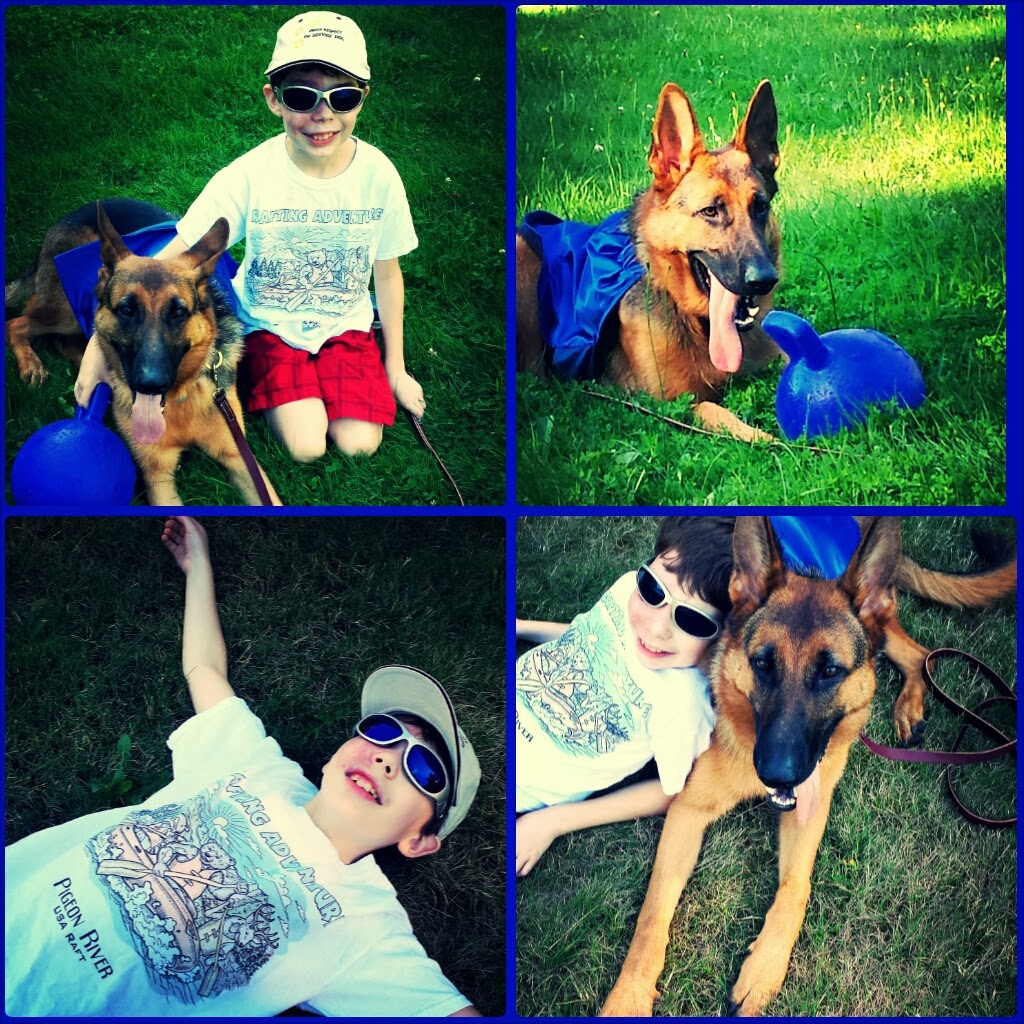 Since I last checked in on the blog I have sent my husband on his next adventure thanks to the Army. Off he went to Fort Bliss in El Paso to sit through countless classes. I mean seriously he sat through how to exit a roll over vehicle & an IED class. I'm sorry but if you've deployed 5 times in the past 11 years these seem like the dumbest classes EVER to make these guys endure. I think I am only mad because his time for this hardship tour doesn't start until his big size 11 1/2 combat boots hit the ground in Egypt. So thank you Army for wasting ten days of time away from our soldier to make him sit through silly classes that I sure hope he would know by now, most likely by heart!
I think saying goodbye caught us all off guard. We knew he was going but we didn't really expect the sudden tears that spilled down my eyes at the airline gate. My poor husband was shocked. He kept telling me how easy this time was & how different. But in my head all I could feel was sadness that he had another whole year apart from our family. I mean he isn't getting home until January 2015- to me that is just NUTS & I've done a 13 month deployment before. Not sure why this time it bugs me.....

I took the first three days in my usual stride. Thankfully the boys didn't have obligations so I was comfortably in my pjs by 3PM every day for 72 hours. Our 18 year wedding anniversary day came & went with me in my pj's.By Tuesday I headed to appointments with the boys & hit up the gym. Pouting time was over and we all just sort of fell right back into our routine. I told my friend today while at coffee how it just seems normal now when Paul is gone. How sad is that, that the house can just flip a switch and run smoothly, well so far smoothly. Coffee with a friend was a nice break today away from the house. Baking some brownies for the boys & new gluten free muffin recipe for me tonight was also nice. Now we just sit back & wait, wait for the Army to finally get him to Egypt so our year apart can really start. 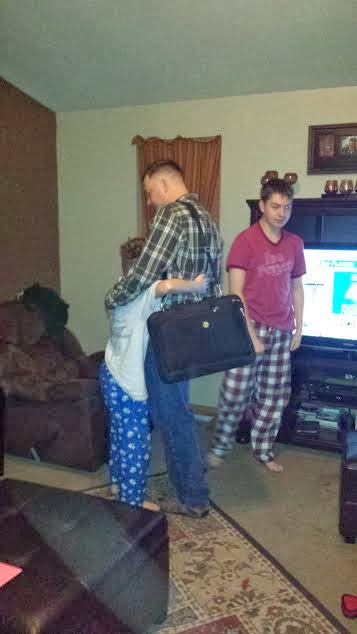 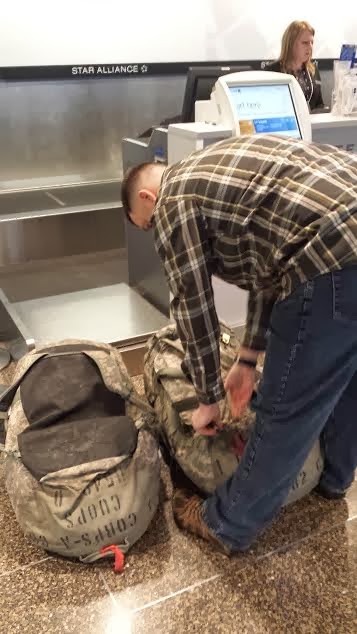 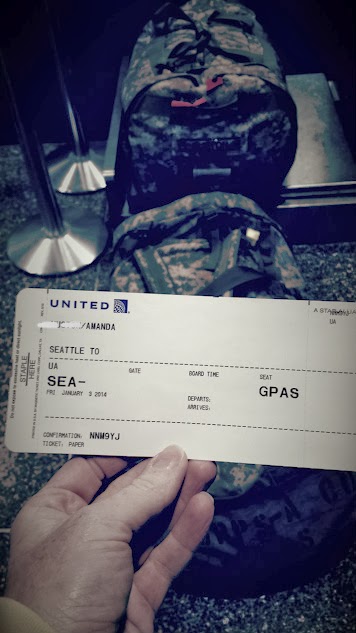 Happy 2014, I can hardly believe it's a start to a whole new year already. At times 2013 seemed to fly by and at other times just drag out. I know that is normal for every year , but hear lately it has flown by with lightning speed. The next 48 hours could really seriously slow down to a snail's pace for me & the family. We had a  lot of fun at our annual PJ New Year's Eve party staying in our neighborhood close to home. We had good food, drinks,laughter, & a seriously strange new board game to try last night. The kids loved running around blowing the party horns that once again all the adults questioned "why" we buy them every year, way to loud! I loved that Paul was home and able to spend the start of his year with us & his friends. Overall a wonderful night that was the perfect way to usher in 2014 & all the fantastic opportunities that lay ahead. We hope you all enjoyed your New Year's Eve whether it was spent at home quietly or even at a huge event with fireworks. Remember today is a new start to a new year. You can choose to make the year whatever you like. I plan on making it fun & exciting for our boys while Paul is in Egypt. Hopefully take a couple road trips , pick up Balto from TN, and just enjoy the life God has blessed me with. Blessings to you all in 2014!! 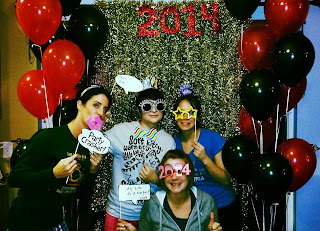 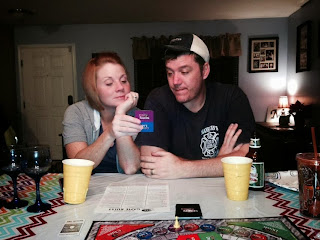 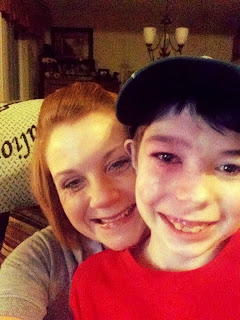 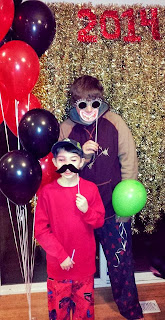 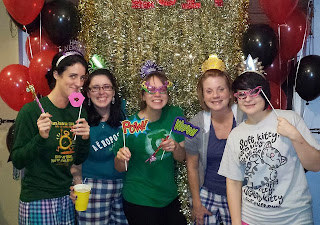 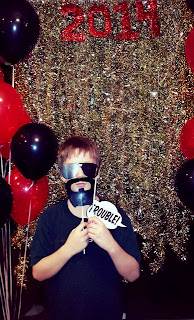 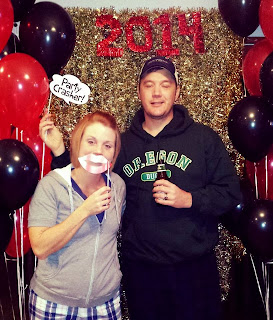 The silly flash got Paul, we had just arrived so it was still way to early for this look he is giving -haha
Posted by Amanda at 9:13 AM 0 comments