Wedding Anniversary - 15 years together a look back....

Today Paul & I celebrate a milestone that few others these days seem to reach, 15 years of marriage. I can hardly believe that it has been that long ago when we said "I DO" in Nashville, TN.Some years seem to slowly creep by at a snail's pace & others seem to have flown by without to much thought. Funny how life does that, don't you think? I have learned over the years what Paul loves in his everyday life & I hope that each day I try to show him how special he is to me. Don't get me wrong we have had our fights over the years. But somehow we have managed to come out on the other side a little stronger each year.

I was driving home yesterday & reflecting back on each year of marriage . I was trying to recall at least one thing that made each year with Paul so special.I came up with a few I'll list below for everyone. Some where big milestones in our lives & others may seem small but meant something to us. I hope that God grants us many more years together as a family. That he continues to strengthen our love for each other & maybe not give us to many more tests-LOL
Happy Anniversary my love,my soldier, my friend- remember I love you More today then yesterday.
XOXOXO


1996: I experienced my first Deployment of Paul's to Panama & had our first born Son

1998: We welcomed our second son into the world on May 24th-7 days overdue! My gramps had passed away the day before-we miss him still today.

1999: We enjoyed living in Alaska & watched our nephew compete in his first Dog Sled races- a first for us to experience as well.My sister-in-law also came to live in AK with us and cared for the boys as I went back to teaching.

2000: We said goodbye to some dear friends who where tragically killed in an airplane crash & got pregnant with baby #3. Our third son was born in late October 2 weeks overdue!

2001: We did a PCS to Fort Lewis, WA with our 3 boys & Paul joined the first ever Stryker Brigade Combat unit in existence.  9/11 happened & our whole world changed.

2002: We had our fourth son in June & found out Paul's unit would be deploying in the upcoming year to Iraq.

2003: Paul left for Iraq in November for his first deployment. The boys & I drove to Mississippi to stay with my parents over the Holidays.

2004: Paul returned after 12 months of combat in October to us! We bought our first home together in Yelm, WA.

2005:We enjoyed a quite year at home with Paul moving over to a new Brigade to start his Platoon Sgt time.I take over with help as the FRG leader of his new company.

2006: Paul learns he will be rapidly deploying with his new unit to Iraq for the second time. We have a horrible year of crazy things happening at home as well as losing many good friends to combat in Iraq.

2007: Paul returns home in May after 13 months away with no R&R to Fort Lewis. He get's promoted to 1SG & takes over a company in his Battalion.I step in as FRG leader again & enjoy getting to know all our families.

2008: We enjoy some down time for about 6 months then Paul get his orders for another rapid deployment to Iraq for the next year.

2009: We get our second Weimaraner & Paul leaves in April to Iraq for the third time. This time with the last combat unit to leave Iraq. I stay behind & get to attend the AUSA conference in DC with other wonderful FRG leaders- it was the highlight of my year!

2010: Paul returns home in May from Iraq & switches to a new Brigade for the first time in 6 1/2 years. He has finished his 1Sg time & is working on his MSG time in rank. Paul reaches 20 years in July of service to the Army. We learn he will deploy to Afghanistan for the first time in the up coming year 2011. We celebrate a wonderful Christmas season together & try not to worry about 2011.

January 6, 2011- We celebrate 15 years of marriage together. More to come later through out this year . 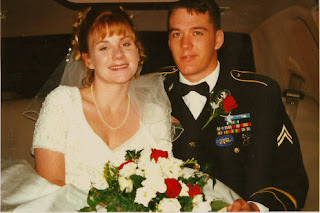 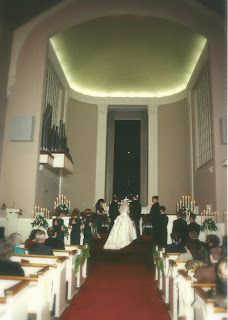 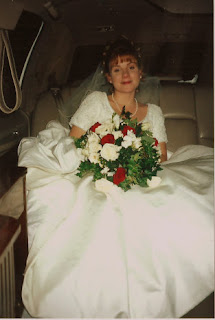 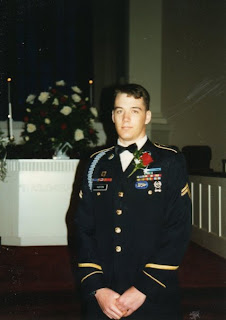 Love is patient, love is kind. It does not envy, it does not boast, it is not proud. It is not rude, it is not self-seeking, it is not easily angered, it keeps no record of wrongs. Love does not delight in evil but rejoices with the truth. It always protects, always trusts, always hopes, always perseveres.
This was the passage read at our wedding before we said our vows, I still Love it today.

Happy Anniversary!!!! You guys are amazing to have survived 15 years through all you've been through. A lovely princess and her handsome soldier....and God