Some have asked about my links to the Weimaraner Clubs on my Blog & Facebook so here goes. 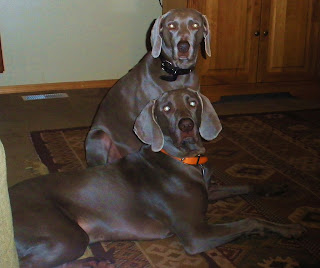 We have two Weimaraners who pretty much think they rule our home. Heidi will be 5 years old on Valentines day. We adopted her after she was reclaimed by her breeder from a person who wasn't taking good care of her.She has been in our home since she was nine months old & is a Daddy's girl!! She loves to swim in the lakes by our house & go bird hunting with my husband. She is getting a little older but you would never know it because she hasn't slowed down a bit!She still guards the house with crazy barking if she hears the slightest noise or car outside. Especially when my husband is away. You would think she is a huge dog if you where on the other side of the door & question coming into our home.
Now for our "baby" I say this because Panzer will only be 2 years old this April. This photo below is how I was drawn in to bringing home this character. 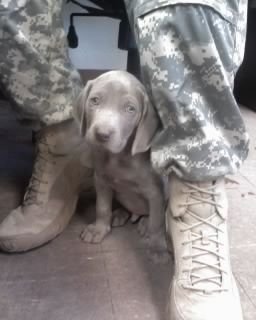 I mean seriously who could turn down that face!  He was 8 weeks old in this picture taken at my husbands office the day I first laid eyes on him. The husband called while I was on post & asked me to stop by his office he has "something" he needed me to see. He knew I had one of our boys with me & it would be a no contest decision on adding another dog to our crazy household.I saw him & had to bring him home on a "trial" basis that has lasted almost two years now.
Panzer has boundless amounts of energy as any good Weimaraner pup is suppose to have. He loves digging, running, & now swimming with Heidi. They are inseparable pals- who love my boys to death!  Panzer was suppose to be the big male who could hunt all the time with my husband. But when Paul deployed while he was only 4 months old, he became a "mommy's" boy. He does whatever I ask & sometimes looks at me when the husband asks him to do something to see if he really has to do what he is being told-HAHA.
They are both very intelligent & I love having them in our home even on the days they destroy it while I am away for to long. This is just a reminder from them that they want ALL our attention because they are the most important in the house <<sigh>>
But I feel super safe whenever the husband is gone & they are on watch. Be prepared if you ever decide to adopt one of these beauties- the breed is very High Energy!! 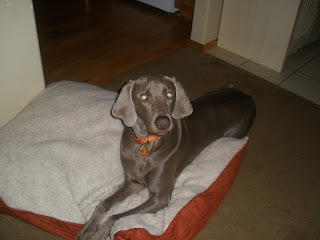 Panzer on Heidi's bed he stole then preceded to chew to shred's!! She was so MAD at him! She snorted & huffed-LOL They have great personalities & I am so glad they are part of our life. 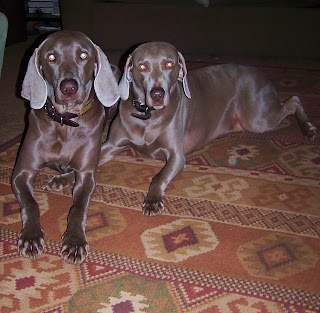 Panzer Cooper & Heidi Brooke December 2010
Posted by Amanda at 7:46 AM