I've had a few people ask about the Sturge-Weber link I posted in My Daily Life section. In October of 2000 Jeremy Glynn came into the world & he is our EFMP (exceptional family member) Angel. I have copy & pasted below a brief summary I posted on another site for those who don't know Jeremy's story. I just read this on another blog & it fits my post perfectly so I will share enjoy reading Jeremy's Story.

"Detours are not roadblocks. What we see as obstacles, God may choose to use as a bridge to bring us closer to where He wants us, next to him."

On October 27, 2000 at Fort Wainwright Alaska Jeremy Glynn Huston came into the world. The first shock was that he was a boy as we had been told to expect a girl. The second shock was the large purple bruising, is what the doctor called it at the time, that covered the right side of his face & scalp. After 24 hours the doctor came back and told us that Jeremy had a Port Wine Stain (PWS) & it might have possible side effects on his health but it was to early to know yet. We took him home & began our research journey to discover that most children born with a large PWS like Jeremy's had a rare disease called Sturge-Weber Syndrome. It can present with a PWS but sometimes doesn't. Our first doctors appointment was to the pediatric ophthalmologist as his right eye was red & swollen. We found out at 6 wks of age Jeremy did in fact have Glaucoma from the SWS in his eye. Thank goodness a few days later Paul came down on orders for us to PCS to Fort Lewis, one of the only post that has all the specialist Jeremy would now require.

Next we did an MRI to get the diagnosis we needed to get all the doctors on board- he did in fact have extra blood flow & vessels in his brain that led to a SWS diagnosis. We moved in Feb of 2001 to Washington & I believe that Jeremy had his first seizure while staying at hotel in Seattle. At the time I had no idea that was what was going on with my baby. I thought he was simply fixated on a object across the room. But now that I know Jeremy has Focal seizures that can be easily missed if one has never seen them before, I Thank God that he allowed Jeremy's body to reset on it's own.  His next seizures where at 10 months old while Paul was gone to school & I was in Colorado with his family. He turned blue on the way to the hospital & I was scared to death. Thank goodness his Aunt Stephanie was an EMT who drove like a maniac to the hospital since his parents lived way out of town. After several hours they got his seizures stopped & we where released only to return 24 hours later with more seizures. At this time they admitted him & I began a 5 day stay with him at the hospital learning everything that I needed to know to care for him.

Jeremy's seizure's are different in that he he can have a stroke everytime he has a seizure. So I learned he needs immediate medical intervention to stop his seizures. We where given Valium that we administer at home should he have a seizure again at home. This gives us the time we need to call for an ambulance who would have oxygen that Jeremy now needed everytime he seizes to help prevent brain damage. We finally where released his seizure are controlled with Tegrotal now & I can thankfully say he has been seizure free for 3 years now. We never know when or if he will have seizures again. So every day that passes with a "normal" routine I am truly thankful.

Now his PWS or birthmark we learned can be slowly removed with a Laser treatment every 3 months. We decided after much research & talk with other parents of children with PWS to do this for Jeremy. If left untreated it can develop very thick & fleshy with nodules on his face. At 18 months of age Jeremy had his first Laser treatment - we weren't prepared for the swelling after the treatment. It was quite a shock to walk into recovery & see his eye swollen shut & all this little laser zaps on his face. After about 2 weeks the dots faded & the swelling was gone. Slowly over the 3 months we noticed little white patches of skin on his PWS area. He has now gone through about 18 treatments we estimate. His PWS looks more like a wind burn now & is even gone completely in some spots. I have attached a picture so you all can see how he looks 24 hours after a treatment. He no longer likes to go in public for about a week afterwards. To many people stare & ask me what happened instead of asking him. So I hope if you every see one of these angels out in public you are better informed & treat them just as you treat anyone else, this is all they want.
His Glaucoma was treated with 4 eye surgeries starting at 4 months of age. His pressure is now under control but he has no depth perception at all in that eye. So going up & down stairs , curbs, are quite challenging. But he does it all on his own if he can! If the sun is to bright he asks for help as the sun really is painful for him in that eye. He will close it to shield it if he is in bright sun. Once again I thank God everyday for sending us to WA where it is dark & dreary 80% of the year.He now requires 2 types of eye drops a day to see out of that eye & keep the pressure down. He can't read or write when black or gray lettering is used very well. But if it's in color he does fine. So reading & writing has been a huge challenge for Jeremy. This led to us deciding I would stop working & Homeschool Jeremy. He  has a very bad time with retrieval due to a bad round of over 25 seizures when he was 22 months old. It damaged that part of his brain & makes it difficult for him to remember everything some days. Sometimes reading is easy & he recalls everything. Other days you see him struggle & it breaks my heart. But he always tries & has the best personality about the whole situation.

I thank God everyday for giving us Jeremy our special angel. It has taught me patience that I never knew I had. It gave my other children the ability to realize early on that different doesn't mean  you aren't normal like everyone else. It just means you have a different way of accomplishing things in your day. Jeremy is so loving & always shows other children or adults kindness if he see they have any kind of disability.We have had the pleasure of hosting the first ever Sturge-Weber Family Day in the PNW in June 2006( If you know me , you know I love to organize events). We had families from Idaho , Oregon, & Washington drive to Ft Lewis & spent the day BBQing, playing games, & taking pictures. Paul & I realized that day that we may have many challenges with Jeremy, but we are truly blessed with his health. It could be so much worse then it is for him.

I hope this gives everyone a little more insight into SWS & PWS. Just remember when you see these angels out & about they are just like any other child in the world. They just want to grow up & have a happy life like the rest of us!

The Stronger the Wind, The Tougher the Trees (SWS motto)

http://www.sturge-weber.org/  This is the link to learn more about SWS. 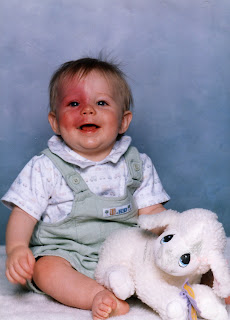 Jeremiah Glynn at 10 months the day before his first Hospitalization 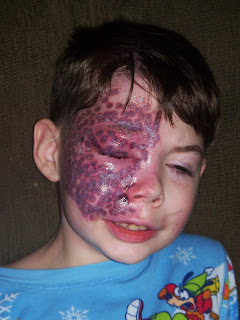 Jeremy a few hours after his laser treatment 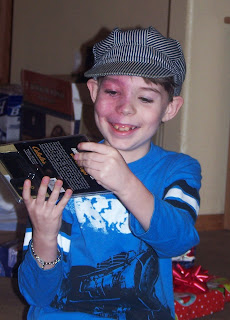 Jeremy 6 weeks after his Laser treatment

** Since this was written Jeremy did have  seizures after his laser surgery, Thankfully we where at the hospital & they stopped it quickly. He has also had 2 more eye surgeries as his pressure has risen some. His laser surgeries have currently been stopped to only once a year. His plastics doctor thinks Jeremy's PWS will never completely go away but has significantly lightened. Now it is more about maintenance to make sure his skin doesn't develop nodules.

We also let Jeremy start school full time in the fall of 2011 so that he could receive some special therapies I could not provide at home. He loves it & is looking forward to another school year.** 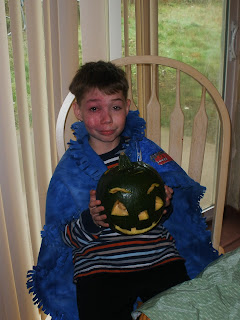 I'm so glad you posted about Jeremy. He's been such a blessing for all of us too. I learned more than I knew there ever was about SWS when you moved in next door.

The 25 seizure time was so hard and full of stress, anxiety and pain. You did so well and taught those blippity blip doctors more than THEY ever knew about SWS....go get 'em Amanda...Grrrrrr. You kept telling them he needed oxygen and they would NOT do it. When they finally did he responded better and didn't turn colors....duh. Mom's know best.

Jeremmy is the sweetest, smartest(I mean REALLY smart)cuddly boy in the world. I will always be honored that we are one of the few families you ever trusted Jeremy with when he was little. That meant a lot to Ed and I. Remember the first time we left him with Ed and the kids and he had to give him his Meds?? I think we called 5 times! Mr. Ed thought he was brilliant and did fine. He loves that boy.

Jeremy taught my boys (and all the kids) about children who may look different in a different way than most kids might learn. Because they are home schooled like Jeremy, it never occured to them that he was different at all. If someone else came over and mentioned it they would look confused! Jeremy is a gift.