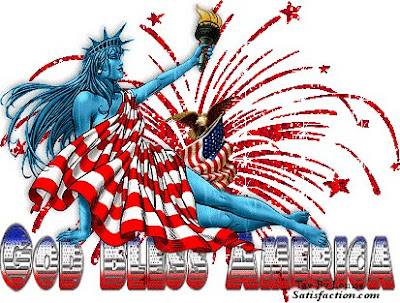 May everyone have a Safe & Happy 4th Of July.
Never forget Freedom isn't Free. We owe all our freedom to those who fought for us to enjoy all our bar-b-ques & fireworks tonight. Thank you to those brave men & women who are still fighting for us today.
Fun Facts:
On this day in 1776, the Declaration of Independence was approved by the Continental Congress, setting the 13 colonies on the road to freedom as a sovereign nation. As always, this most American of holidays will be marked by parades, fireworks and backyard barbecues across the country.

In 2010, the dollar value of U.S. imports of American flags. The vast majority of this amount ($2.8 million) was for U.S. flags made in China. (COME ON PEOPLE- Buy MADE IN AMERICA!!)

Annual dollar value of shipments of fabricated flags, banners and similar emblems by the nation's manufacturers, according to the latest published economic census data.

The value of U.S. manufacturers' shipments of fireworks and pyrotechnics (including flares, igniters, etc.) in 2007.


Fireworks were first invented in China over 2000 years ago. The first firecrackers were chunks of green bamboo which when put with fire which causes them to make a loud cracking sound. Because of the way Bamboo grows, it allows for air pockets to form inside the plant's segments. Once heated up, the air inside the bamboo expands which causes it to crack through the sides which produces the cracking sound.
For more Fun Facts go to : Newsroom Facts

Thanks for the facts, was an interesting read.