After a great Fourth of July spent at the lake with friends we headed out bright & early for the airport . The four boys had to catch their plane to Tennessee so they could spend four weeks getting spoiled by their Ommie & Pawpaw! Luckily it was the perfect distraction from the fact that their dad was also leaving for his deployment later that day. The husband decided to wear civilian attire to the airport to keep his leaving low key for the kids. When it was time for hugs goodbye they where all smiles & even a fun chest bump from Matthew. No tears for once except from mom which was nice. The ploy to keep their minds off their dad leaving had worked! 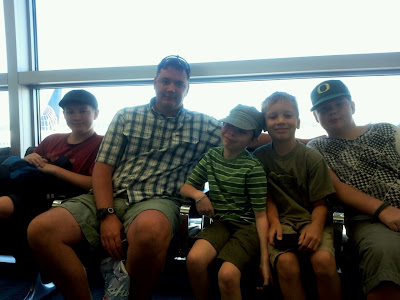 After we watched the plane take off we hurried out to the car so we could grab one last cheeseburger for the husband on American soil. We ran to McDonalds where he grabbed his favorite burger,fries, & Pepsi as we chatted. We where trying to smile & keep the conversation as light as possible. It wasn't helping that the radio station playing in the background was playing every song you can name that had to do with missing someone, leaving someone, or wanting to go home! Seriously, even Paul commented on it before we left. We headed to Soldier's Field House where all the departures where taking place. Paul changed into his uniform & we waited outside in the sunshine for a few moments. We snapped one last "couple" picture before he had to go inside the gym. 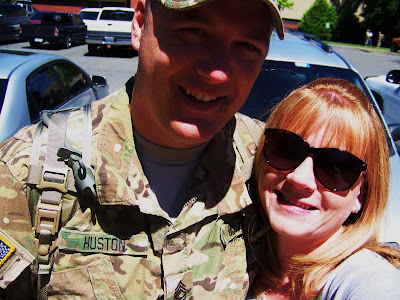 Not our best but I'll take it!
Off we go to sit on the bleachers & wait until it's time to manifest the plane. As they line up I tear up. I don't care who says to you it get's easier, it in no way was easier watching him walk away for the fourth time! I chatted with another wife who was sitting beside me watching the scene unfold. I have no idea who she is or what her name is, but we kept each other from bawling- so that is all that matters.  I noticed we could walk our soldier's out to the buses so I ran to the other side of the gym as they called Paul's name to go with him. He was laughing because I was walking with him & went right up to the buses. He was like " babe are you coming with me?". I would have LOVED to have jumped right on that bus & drove to McChord with them! But I smiled stole one last kiss,snapped one last picture, & turned to walk away. I cried all the way to the parking lot- but that is not what he saw as I left. He saw me laugh,smile, & wave goodbye. 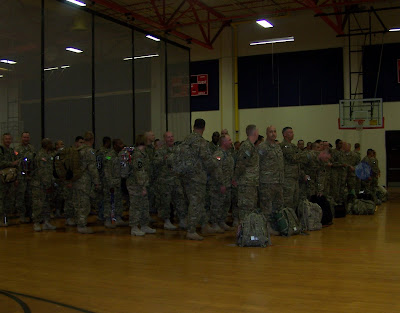 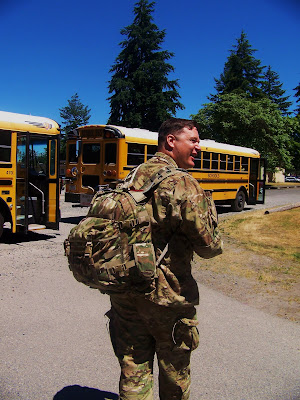 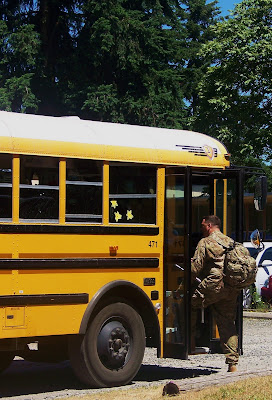 Now the countdown begins to R&R time. We have no idea when it will happen but it is closer then the end date of the deployment so I choose to count down this date instead. Now I begin a couple weeks of feeling all out of sorts & an emotional basket case. But I have no kids here to witness it all this time around. They are already in TN having fun, which makes me happy. Hopefully I'll hear from my soldier at some point on his way as a little check in- which will help calm the nerves. But for now I will sit back watch sappy movies so I can cry & not feel like a complete idiot.
** EDIT** Around 7:45AM my time Paul was able to jump on a computer to let me know their plane had broke down  :0( They where stuck waiting on a part at an undisclosed location to you the general public- sorry folks OPSEC. But he was handed a internet card from the lovely USO where they where at for 45 free mins! He jumped on FB because as he said "I knew you'd be on here waiting for me!"- DANG RIGHT I WAS!! I have to say I am super selfish right now with his chatting time on FB- so please don't take it personally if I ask you to STOP chatting with my man so I CAN!! Until we both adjust to this new deployment routine that's just the way it is - like it or not!  So happy to hear from him & know they will be on their way again soon. I'll update as I hear more.
Posted by Amanda at 12:00 AM

I'm definitely crying. I know you're one strong woman. Keep your head up!