The Biggest Smiles Ever

I always know that Christmas is one of my children's favorite times of the year. They always love the baking, shopping, gingerbread houses, decorating, & SANTA!! I have one little sweet boy who still Believes...... I don't know if or when he will ever not Believe & that is just fine with me!

We headed to the EFMP Christmas Concert again this year with Jeremy & Jacob on Tuesday.Jacob kind of sulked when I asked if he wasn't enjoying his early release from school to listen to the I Corps Band play Christmas carols he shrugged. I dropped it because Jeremy was having a ball & requesting songs like crazy! Of course the last song was Here comes Santa Claus  & low n behold he walked out! I love the elderly man who volunteers every year to play the Santa for EFMP gatherings. He looks just like him & does it for free. I couldn't hold Jeremy back from jumping in line to go tell Santa his list of toys. Jacob opted to sit in front of the fireplace. I got the biggest & best smile as always from Jeremy. My picture is a side view but the EFMP lady took a couple they should be sending us & she claims to have an awesome picture of Jeremy with Santa. Banyan thought I had lost my mind letting Jeremy sit on this guys lap as well as let some strange lady get close to take a picture. He stood right in between Jeremy & the photo lady-haha' But Here is the best smile all year long- it really reminds me that Christmas is for the kids.  I hope I have taught the kids that giving is a huge part as well as we helped out as much as we could this year. I am looking forward to Christmas Eve & Christmas Day thanks to this special little man who still Believes. 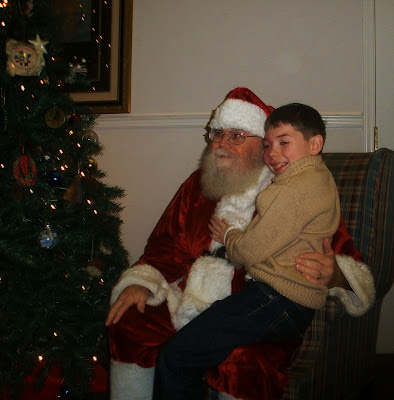 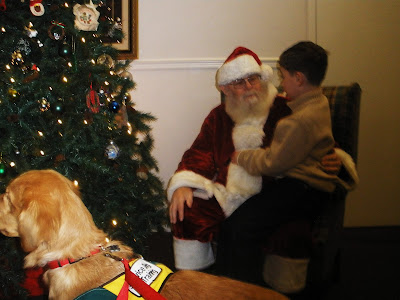 Banyan trying to understand why mom would let this happen-haha 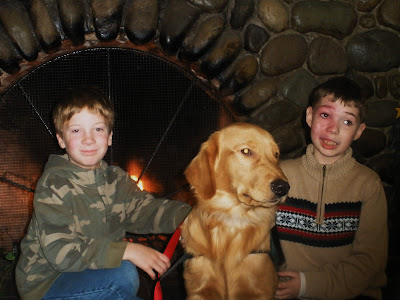 Where Jacob sat while Santa visited. I later found out he was so quiet because he was missing his dad who usually goes to these things with us. Poor little guy, he is a trooper.
Posted by Amanda at 2:19 PM