The first day of Spring arrived in the Pacific Northwest with this huge bright shiny object up in the sky?? Took us all a few minutes to realize it was the Sun it's been so long since we have seen it! I as a soccer mom was so very happy not to have another day of down pouring rain & wind! It was also the first day of Jacob's Spring Soccer season. This is his third year playing but his first on an actual team that uses the whole field. We where both super excited to get to the game & WIN!!
It took Jacob a little time to get use to the new rules of the game, but he did great! He was worn out from all the running so mom is going to start running laps with him before practice. Conditioning is a MUST in order to keep up with the big guys! He has loved Soccer since the first time he played, so I am so happy to let him have an outlet for all his energy.We had a few short sprinkles during the game but nothing to bad. His team came back to win in the last few minutes with a score of 5-4 Yelm United WINS!!
He is already looking forward to practice & next weeks game. We stopped grabbed the snacks as it's our turn to provide them after the game.He is laying on the couch now watching a little TV looking like he could nap. Mission accomplished!!! YAY- for SOCCER! 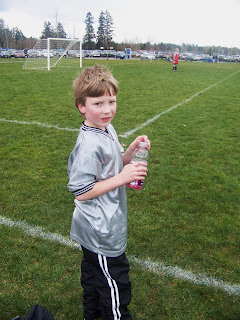 Worn out after the first half. 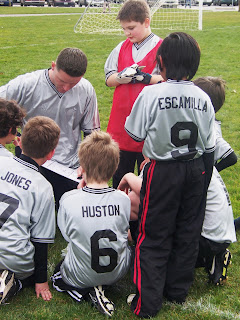 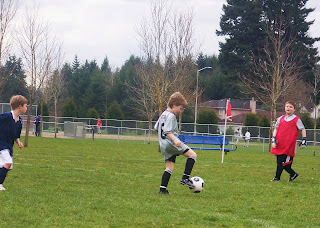 He listened to coach & got the ball 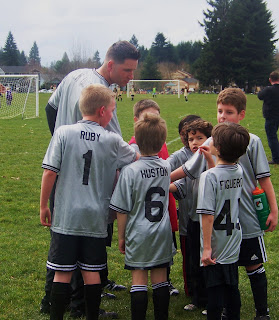 
Dad had to miss the first game due to a conflict with Project Healing Waters. He was taking some Wounded Warriors out for their first Fly Fishing experience with one of my older boys. We called him & gave updates as well as took a lot of great pictures. Both activities today turned out great as Paul said the Wounded Warriors where loving the fishing! So it has been an amazing Saturday afternoon & now it's time to rest. Tomorrow brings church in the morning & Bar-b-Que with friends in the evening. Have a great weekend everyone!
Posted by Amanda at 4:49 PM

Jacob is so BIG!! Yeah, the sun was shocking for us too :) I actually ran to the store and bought 4 pansies!!!

It's awesome that Paul's involved with Wounded Warriors. What a great blessing that is.

Tell Jeremy he can come play piano with Miss Mary anytime he wants to.