I Spoke to Soon

It's really kind of amusing in a weird it's normal to me kind of way. Last week like a ding-dong I did the math & realized out loud that Paul had been home 9 months with no orders to deploy from the Army for the first time EVER in 6 years. I remember looking at Paul & smiling thinking "wow we may actually be done with year long separations. You might be able to just ride out the last year of the Army at home with the family." Yeah I should have kept all these thoughts to myself in my own brain. I spoke them out loud for the universe to hear . Mostly for the Army DA Gods to hear & say to themselves "OOOPPPS, how did we miss this soldier, he should be on orders already we are slacking!".

Paul did have orders come down to head to West Point to teach for two years. I would have loved to move like four years ago. But now with our oldest about to start his junior year of high school it was not a good idea. Not to mention that once again they did not have the medical we need for Jeremy's EFMP packet. A call was made by Paul, & DA said we will look into getting those deleted. We didn't think about it again assuming he was good to stay at JBLM. Then Monday morning he get's to his office turns on his computer to log in & find a nice email from DA. Your right MSG your family can't go to West Point the orders are deleted. BUT you can GO unaccompanied to x, y, or Z for twelve months you choose ASAP or the Army will choose for you. Have a great week, hope to hear from you soon. So yes folks once again we are on orders for the husband to leave, no time frame yet, but once again we didn't make it a year with him at home.

Now the truly bizarre part is when he called me I didn't bat an eye or shed a tear. I thought well this is normal & I'm okay with this again. I think my body no longer register's it means a year of single parenting again with all that can go wrong happening. I honestly think my body & mind have a built in system now that just goes with the flow. Sounds crazy to a lot of people I'm sure. But this has been my families normal going on seven years now. Paul home a year then gone a year. I think also it helps knowing we can pick were he chooses to spend the year & it's not in a war zone. He was really upset & retirement was tossed around again. I let him know I would support whatever decision but we are just so nervous about him getting out & there not being a job. He hasn't had the luxury of completing any college because well he was at war for the past few years been a little busy staying alive. He was told he could complete a year's worth of school while he was gone this time. I guess they are giving the college back to our soldiers. It should have never been taken away but that is a whole different post.

So were you may ask did we decide? The husband will be taking a tour of Egypt folks for a year. Time to leave is still to be determined. he will call DA this morning & pray they keep their word of letting him pick. He really was not to keen on going to Korea- can you blame him? He will get two times he can take leave so we hope to either fly to meet him somewhere do a family vacation or he will come home. We will see how his morale is & what he thinks he needs most. The boys aren't even phased, just like me this is their normal now. We do hope this is it, that once he can complete some college over there he can come home & retire. He is not interested in doing sergeant major as that would mean another year long school away from the family. Please keep us in prayer as we adjust to all that him leaving will entail again. As soon as we get dates I think reality will sink in for us all as a family. But hey I can do this & like I told my mom. You all bought a house right down the street from us, I'll just go live there for a year & she can move in with the boys-HA! 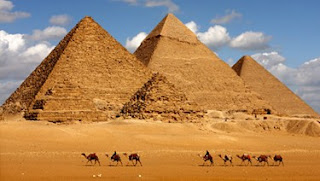 Now to read up about Egypt and were he is off to on his next Army adventure.
This is what I picture in my head. But this is what we looked up as well.

I want to go visit if we can go to the location of this picture.
When the Army promised my husband he would "See the World" they certainly didn't lie on that one promise they made to him.

Wow. Definitely thinking of you guys and praying he gets Egypt. You are such a strong family, it's definitely an inspiration.


Following verify some the actual web site articles on your own site now, in addition to My spouse and i really similar to your own method of blogs. it had been very very excellent in addition to helpful.
gold buyers in Houston
sell jewelry Houston

Wow what an incredible adventure that would be!