Today found me waking up at 4AM to begin getting ready for the Run for Your Lives 5k in Onalaska, WA. I was so excited for this fun run as my team had signed up to volunteer first as Zombies on the course. We arrived at 6:45AM & headed to the make-up tent. Since we where some of the first zombies the make-up artists where excited to get their hands on us,  they had a blast! They did an amazing job transforming us into brain chomping zombies.

Here I am all medical zombie girl 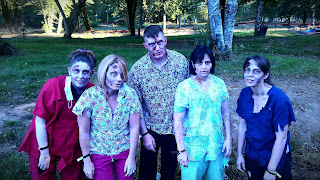 Our whole team the Brain Chomppers 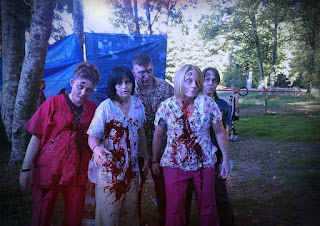 We had a great spot on the course that came as the runners came down a hill into a nice shady area. We where suppose to be stumblers but a few times we got excited when some of the runners where a little mean to a fellow Zombie. Yeah those people got chased & their flags taken! I was shocked at how depressed and frustrated most of the runners where on this course as they came by our station. We of course where having a blast! One runner was guarding his flag & in the process elbowed poor Ashley in her jaw. It hurt so bad she got a headache & needed a minute to recover. Another runner slapped her arm so hard we heard the pop but at least he stopped to apologize.  I think some of the runners it was really natural instinct to scream and slap at people grabbing you. Others where just down right mean & nasty. 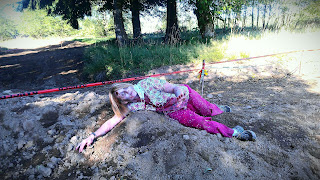 Here I am laying at my section on the course. The runners thought since I was on the ground they where safe. Little did they know if they stopped by me I would reach up & grab their flags! It was so fun! We volunteered for three hours and by the end of our shift we where exhausted! We actually didn't care when the last of the runners came by because the heat had wiped us out. Today it was 89 degrees on the course. Way hot for WA! We where hungry & feeling a little dehydrated by this point. We headed to the line to sign out, drink some water, eat a snack , and run the course.

We soon learned why the runners looked so sad & upset by the time they reached our section of the course. The course was on a BMX bike track so there was a ton of hills with huge crevices. Running was almost impossible. We witnessed several rolled ankles & hurt arms as people tumbled down. We decided then & there to walk most of the course I knew I had to many more runs to get hurt.. We ran the sections that where safe but it was so hot with the sun we really felt awful. My head was pounding from lack of water & food. I do believe we should have sat down in the shade & ate for awhile before we ran. Lesson noted for next year. A lot of the zombies we found weren't following the rules & where grabbing more then one flag at a time from the runners. I think this is why a lot of the runners where upset as well .

All in all my morning was a blast!! I loved the make-up & capturing flags with my team. The run was a 4 on a scale of 10- with 10 being the best. If you are going to just be a runner I'm afraid you will be disappointed at least in the PNW. I say volunteer to be a zombie & do it in the very early group! If I do this run next year it will be because I loved the volunteer time on the course the best. I am glad they cut our registration fee in half for volunteering. We met a lot of fun zombies along the way . Here are a few more fun picture. 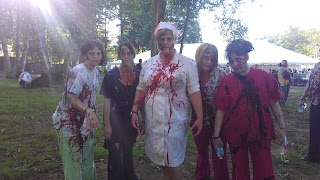 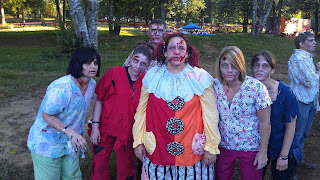 A really creepy clown who was super nice! 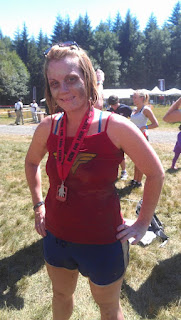 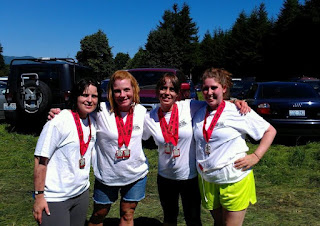 GIRL POWER!!
Oh and I have to add that my make-up artist was so excited with my "perfect" bone structure for being a zombie-LOL Not sure if under normal circumstances that would be a compliment ?? But for today it ROCKED!
Posted by Amanda at 6:50 PM

I am so jeleous, I was so hoping they would have a run like that near me! Looks like so much fun!