Yesterday I woke up to another beautiful clear sunshine morning in the Pacific Northwest. The kind of day that tricks you into thinking it is almost Spring time. Of course having lived here in WA eleven years yesterday I know better. But it does not mean we didn't enjoy every minute of the cold but pretty day!

It started off with me taking Banyan to the gym for only the second time. This time I took him inside during my Cardio work out. He laid down beside the elliptical for a whole 32 minutes before he became a little fidgety. I was really excited with this length of time for him seeing as he is only 8 months & the noises where new to him. We then headed to the local park that has ducks. Being as Banyan is a natural bird dog- ducks or any bird has been his issue lately. It doesn't help that Panzer our male Weimaraner sits by our sliding door to watch the birds all day long. At the duck park I tried no haltie on Banyan to start with as we began our walk. It became very obvious he needed the haltie to help him listen & loose his "puppy brain" . As soon as I placed his haltie on him he settled in to watch the ducks very closely with only an ocssional whimper. He did as good as I could have expected  for a puppy. So now we will go to the park as often as the weather permits to continue his desensitization to the ducks. We need him to be ok wth all birds around him enough that he will never pull Jeremy along on a bird chase once Jeremy becomes his full time handler. 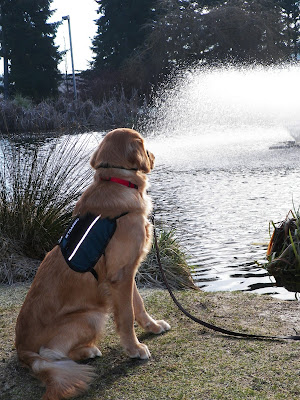 Watching the ducks swimming all around.
Then it was time to head to Safeway where the Boy Scout Troop 603 had set up for the Raffle Ticket sales. What a blessing we had the sunshine. Our table was right at the entrance & in the shade. My feet eventually went numb at one point & Banyan started to shiver. I went & got a blanket out of the van for him to lay on eventually. He did so well hanging out for about four hours. Barney another wonderful dog from All American Dogs
joined us half-way through the morning. The two of them together impressed the grown-ups and wooed the children. Banyan did perfect by waiting to allow the children to pet him until I asked him "to go say hi". We have been working on it & he is doing quiet well. 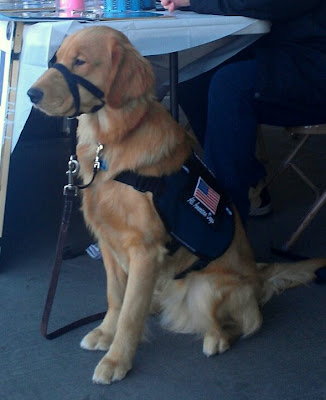 Banyan sitting by the table at the start of the ticket sales. 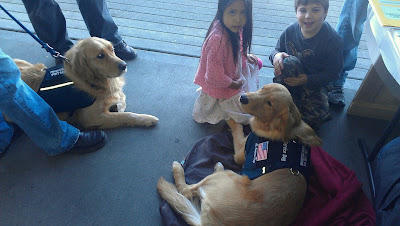 Barney the 3 year old Golden who joined us during the day.
Banyan started to show me signs he was exhausted around 3PM. Some didn't understand why I felt he needed to leave. But all day he was working. Banyan knows now when his vest is on he is working . He may look like he isn't while children are petting him, but it wears him out emotionally. He is letting the kids soothe because he is allowing them to love on him.  Also anytime I moved away from him he sat alert to watch me or even joined me as he has to have me in his line of sight. When he laid down on the blanket and looked like he was dozing off I knew he was done & it was time to go. 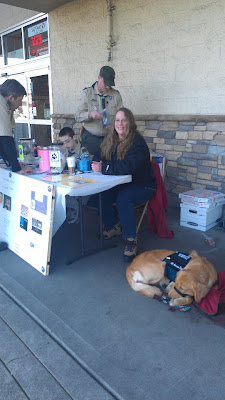 Banyan showing me he was tired & ready to go home.
We where so blessed with ticket sales yesterday & meeting wonderful people from our Yelm community. We raised a little over $900 in ticket sakes as well as cash donations. The money goes towards the continued training of Banyan over the next 3 years. It was great to talk with people about Service Dogs & the training  that goes into them. I was so glad I was able to be a part of it for as long as we where able to be there.
Ticket sales continue this week on-line so we can only hope to break the $1000 mark by this Friday- How amazing!! I know that all the hard work that Jeremy & I put into Banyan right now will one day lead to a better quality of life for my son. That Jeremy will have the independence that his brothers have to go places with out me or my husband. I know I get exhausted at times & feel over whelmed. But days like yesterday remind why we are in this new journey & how much support we really have all around us everyday. Thank you to Devon one of Jeremy's friends & his parents who brought the idea to the Boy Scout Troop. Thank you to the boys and their parents who whole heartily jumped into the raffle with both feet to help benefit one of their own. After eleven years of living in WA yesterday it truly felt like we where home, this is where we belong. How amazing and wonderful it just happened to fall on the exact day that we arrived to WA eleven years ago when Jeremy was just 4 months old.
This was sent to me by a friend who came out yesterday to support our family. The meaning is so true. All this work is so Jeremy can have  Good Life.
Posted by Amanda at 7:31 AM

awe the puppy is adorable!
-wHiT