Together we can do MUCH

March 26th marks Epilepsy Awareness day.Jeremy does not have an Epilepsy diagnosis but every time he has a seizure he is considered in "status epilepticus" so we will spread awareness. Anyone can have epilepsy, there is no cure. Help us spread the word, wear your purple on Tuesday in a show of support. Help others learn the facts not the fiction.

2. Like a diabetic who is misinterpreted as a drunk driver, epileptics can often have a seizure that manifests itself as bizarre behavior, such as: repeating the same word, not responding to questions, speaking gibberish, undressing, or screaming. Jeremy has ABSENT SEIZURES, often times people think he is ignoring them or not paying attention.

3.About 1 in 20 epileptics are sensitive to flickering light, or photosensitive epilepsy. The contrast, or change in light, can trigger a seizure.

4. Seizures have a beginning, middle, and end. The beginning, referred to as the aura, can have signs of the oncoming seizure such as smells, sounds, tastes, light headedness, or deja and jamais vu. The middle, is the seizure itself, whether it be a grand mal seizure, or a simple partial seizure. The end of the seizure is called the postictal phase and is the brain recovering, which can take anywhere from seconds to hours and is usually accompanied with disorientation and memory loss. Jeremy has muscle weakness & usually can't walk.

5.The proper treatment for someone having a tonic-clonic seizure is not what you see in TV shows (multiple people pressing their body weight down on a seizing person). Here’s what you should do: Pay attention to how long the seizure lasts, move objects that they could strike out of the vicinity, simply block their way to prevent them from moving too far (or into water, fall off a bed, etc.). Put them on their side after the episode and don’t put anything in their mouth. If it lasts for more than five minutes call an ambulance. Jeremy  must have 911 called with in 2 minutes because he looses all oxygen from prolonged seizures & can stroke.

6. Diastat, or diazepam, is the medicine used to treat a prolonged seizure or cluster of seizures.

7. Epilepsy is usually not a lifelong disorder, with only 25% of those who develop seizures developing difficult to control seizures.Any body can have epilepsy- no matter what age.

8.Epilepsy is the third most common neurological disorder after stroke and Alzheimer’s disease. It affects three million Americans of all ages. Approximately 200,000 new cases of seizures and epilepsy occur each year. One in every 10 Americans will experience a seizure at some point in their lives. Three percent will eventually develop epilepsy.
Yet Cancer get's more Awareness then Epilepsy- let's CHANGE THAT!

9. Epilepsy is not a single entity but a family of more than 40 syndromes that affect nearly 3 million people in the U. S.and 50,000,000 worldwide.

10. The association between epilepsy and depression is especially strong. More than one of every three persons with epilepsy are also affected by the mood disorder, and people with a history of depression have a 3 to 7 times higher risk of developing epilepsy.

These are just a few of the facts about Epilepsy. There are so many more. Please share this BLOG today & share the AWARENESS. Epilepsy isn't contagious , the children & adults are just like you. They have the same hopes,dreams, & aspirations for a long healthy life. Only research, awareness, & a cure can make this possible. Will you WEAR PURPLE today, the color for Epilepsy? Will you SHARE the knowledge you just gained? Will YOU MAKE A DIFFERENCE? 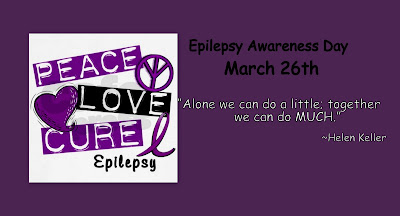 It is so great to get awareness out about this. Thanks for sharing!