Everybody Wants to Be Loved

I am not exactly sure how to start this post about the time Jeremy & I spent in Denver over the past weekend for the Sturge-Weber Conference. We were so excited to attend & the excitement just mounted as we arrived in Colorado last Thursday. Jeremy kept asking if I was sure other kids would be there with birthmarks like his? I assured him that there would be a lot of children attend who had similar birthmarks & who all had Sturge-Weber Syndrome (SWS). As we got onto the shuttle for the hotel we met another family from all places Seattle, WA! They had their nine year old daughter with them attending their first SWS conference as well. Both the kids were excited and were chattering away when we arrived at the hotel with anyone who would listen. Once we arrived it was time to check in but before we could Jeremy saw two or three others with birthmarks. All I heard was "WOW mom they look like me!". I tried very hard at this point not to cry but my eyes were very misty as I could only nod in agreement.

I knew Jeremy was at the age that people asking or staring all the time was starting to bother him. Some days he would answer the questions of on lookers other days he would ignore them. But always I see the regret in his eyes that he has a birthmark & no one else he knows does. Now as we stepped into the hotel he had the biggest smile on his face. No more did he feel different he felt included , the same as his peers. This was a huge moment for us both.I will never forget it as long as I live. 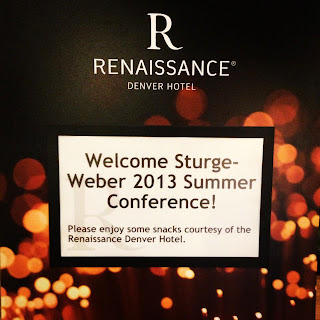 The first stop after checking into our room was the dinner & registration portion of the conference. Once again everyone was so welcoming , children were laughing together. Teenagers were huddled together talking & parents were all smiles. Our kids finally felt like everybody else & the love in ballroom D was palpable. We sat with some lovely ladies who had come from Canada that night during dinner. Jeremy laughed & giggled with the table behind ours as the dad made silly faces through the boring parent parts as Jeremy kept saying. After all the formalities were over it was time to hit the pool!
Here is were I met Josephine & Jeremy met her daughter Julianna. 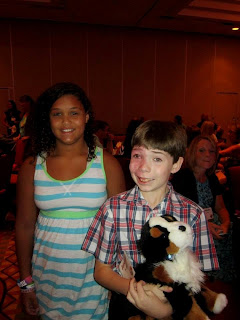 They became fast friends while the moms chatted in the hot tub. We learned we had a lot of similar medical things with the kids & a lot different. That is the crazy that is SWS, no two cases are the same ever. The kids swam until they were ready to head to bed. We had an early morning ahead so sleep was needed. 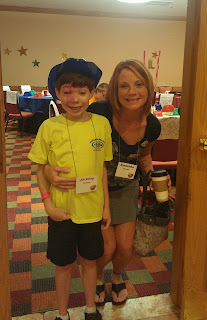 The next morning Jeremy was so excited for the kids camp I barely got him to take this picture with me. Off he went to spend the day making new friends. Off I went to listen to the most fabulous speaker I have ever heard Kathie Snow who wrote Disability Is Natural. She made us parents laugh, cry, & feel like we are normal in this crazy medical mess we deal with daily. I am telling you folks go check her out if you have the chance, it will change the way you think about your children who have disabilities. I met more wonderful parents during the day with our break sessions about parenting. I discussed options for childcare, parenting, & in-laws- yes folks we went there! HAHA!

The hotel kept us stocked up on tables of any kind of snack you could possibly want. Jeremy had so much chocolate milk I thought he might float away. When I picked him from camp he was tired but happy. He was also ready to swim again! 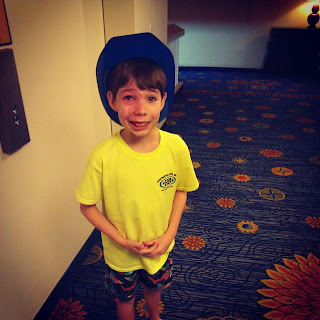 So we went to the pool dressed as a cowboy of course. I mean we are in Denver after all. My heart just exploded as we entered the pool area and all the kids start yelling " Jeremy. HI!! You made it come swim with us!". Some were kids from camp some were sibilings, all were brand new friends he just met that day. Kids who looked similar to him, who didn't notice he can't see well & who didn't care. I almost cried again for the hundredth time that day. It confirmed in my heart what I already knew. That everything we had put into getting Jeremy to this conference was worth my energy. He was blossoming right before my eyes. After swimming it was time to meet in the lobby for the SWS Miracle Mile Walk to downtown Stapleton. We also finally got to met Julie & Doug Hutchison . They are some amazing folks who braved Denver traffic for over an hour to come meet us & walk.

The Chelsea Hutchison Foundation helps families receive grants for service dogs like Balto. They will in fact help give us the money we need to pay for Balto's training when he passes his final tests. We have been chatting with Julie for over a year now & were so glad to meet them during our time in Colorado. 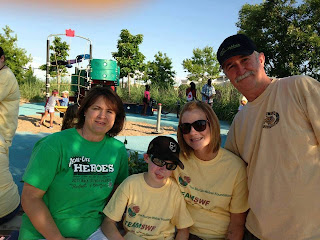 They braved the heat and walked the mile to spread awareness about SWS & a route to a cure. 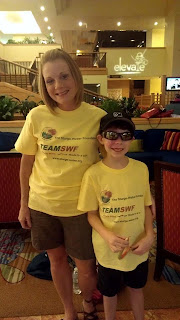 The next day brought more kids camp for Jeremy were he played with new friends Jesse & Madisynn . I got to listen to the doctors explain how they found the gene that causes SWS. I tried to understand it all but some was over my head. What I did understand is that it's nothing I as a mother did while pregnant, it's not genetic, it's just something that happens like a lighting strike! They still don't have a cure but with this amazing discovery we hope one day we will have a cure to SWS.After all the medical talk it was time to meet up with Aunt Stephanie who had recently moved back to Denver. We were lucky enough to get a few hours to visit. 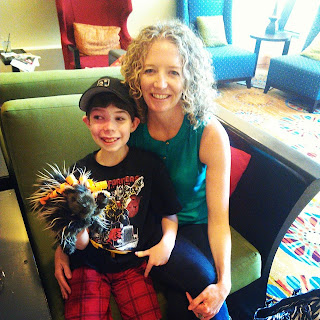 Then it was time for the best part , wait I already said other parts wer the best. That is because the whole conference was amazing! It was time to dress up a little, kick up our heals and celebrate the new friendships we had made. It was dinner & dancing time! 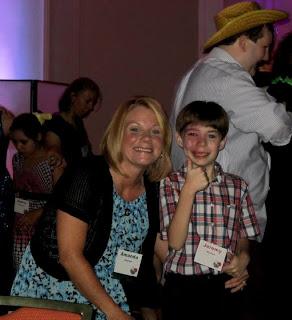 This is were another first for Jeremy happened. After dinner a mom came up to me that I had met earlier in the day. We had no idea while we were chatting away that our children were also playing at camp together. What's more we had no idea that they really liked eachother. Once we made the connection we exchanged address's so the kids could become pen-pals, as she lives in Utah. That's right folks SHE, a girl!! Her name is Madisynn and she is very lovely. Jeremy was excited to ask her to dance. Something he has never done before. I & her mom were almost in tears as he went up offered her his hand and they went to the dance floor. I have some video but have no clue how to post it here. I have a few pictures but the photographer Rick who was running around got some amazing shots & I can't wait to see them. 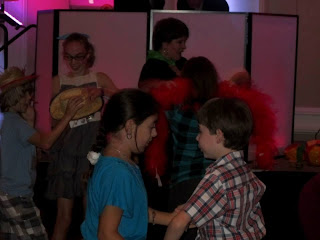 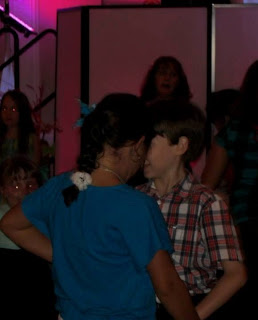 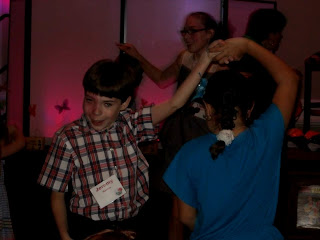 They never stopped smiling the whole time they were twirling away. I never stopped tearing up! It was just an amazing time that is so hard to capture on a blog . Words will never describe the range of emotions that went on last weekend. We made new friends across the country . Jeremy feels so great about himself. His self esteem is through the roof! I know we will try to make another conference happen in his future. The sacrifice is worth it all to see his smile & know he feels the same as all his peers. Even if it only lasts a brief moment in time. I say "a brief moment" because as soon as we were back at the airport a lady stopped and starred for what felt like minutes. Jeremy turns to me with his first small smile of the weekend and says " back to normal, huh mom?". I smiled back and told him we are always normal dude & offered some gum.

I will leave you all with these parting words from this wonderful experience. Never think oh, poor Jeremy, if he only looked like everyone else. If he didn't have so many medical issues. We don't need pity we need acceptance that Jeremy can do all the same things you can it may just take him a different route to get the same results. 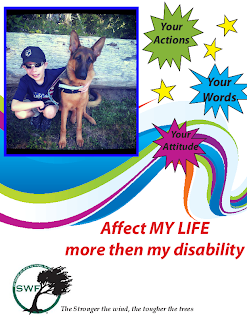 I heard this song over the weekend then again when Julie put it in a slideshow. It really does hit the nail on the head with these amazing children,teens, & adults who go through life with a grace, happiness, & love that only the rest of us could dream of having. I am blessed to have Jeremy & I am blessed to have been lucky enough to meet other amazing SWS families.


I don't want to leave out Rick from Positive Exposure he made Jeremy laugh & gigggle so much! He is an amazing person who decided beauty comes in all shapes & sizes. He has made it his mission to show the world that everyone is beautiful, not just who the fashion magazines say are beautiful. He took some amazing photos & I can't wait for him to post them all. I'll do a whole blog when he does of those pictures. Jeremy has his own series by Rick called "Hats"........