"Holy Smokes Batman" was the last thing I remember hearing last night as I fell asleep in my husbands comfy chair around 9:45PM. Yesterday was a day where I literally ran from one activity to the next with only minutes in between to check in with my husband so he knew all was well. I knew ahead of time it was going to be a crazy busy day, but it wiped me out!


I took our oldest to the Orthodontist, dropped him off ran to Rite- Aid to pick up medicine refills for kids. Then headed to the Post Office to mail my man his care package & three other items filled with books I was swapping. I found a great site called Books Free Swap  but that is a whole different post in itself.  From the Post office I ran to Safeway with all my coupons in hand & list ready to shop. I made it through Safeway in record time & saved $53.48 I believe on my groceries- YAY ME! Then I ran back to pick up Hunter from the Ortho & headed home. Got to the house had boys help unload the van & we all changed into our swimsuits. We headed to the pool for an hour to just try to relax. Then we ran home showered, ate & headed to the Junior-High for Orientation for the older two boys. Hunter my oldest is still considered a Freshman but they stay at the Junior High until 10th grade which is fine with me. Much easier having two kids in the same school then across town from eachother.
I really thought we would be in & out of orientation in thirty minutes like last year- boy was I WRONG! They had total CHAOS going on when we arrived. I even came early! Unlike last year there was no real direction so we ended up in two lines that we shouldn't have been in until last! Finally my friend Sam who was volunteering stirred us to the front of this super long line to get the boys ID cards they use for everything. An hour & a half later we left ,UGGG! I raced home to get the youngest fed,dressed & out the door for soccer practice. At this point I was DONE! Just ask my older two. I was "that" mom who totally embarrassed them when two girls tried to cut in front of us in one of the really long lines- yep I told them to GO TO THE BACK NOW! I am pretty sure my head spun around backwards as I said it too! The boys where like "NO MOM!!", I so DID NOT CARE! I laughed later as I recalled all the girls who looked like they had spent hours preparing for that one afternoon of orientation. Make-up, hair, & inappropriate clothes ruled the day. Only to have almost zero boys pay any attention as the giggled & tried to get their attention. About 80% of the male population where to busy high-fiving each-other  & comparing schedules to even notices the girls-LOL Anyway, back to running out the door to soccer.
Headed to soccer where at least I was able to sit down & breathe for an hour. I met another nice set of parents & chatted the practice away. After  we left & headed home I was more then happy to let the older two boys go spend the night with friends. I knew the house would be super quiet with those two out of the picture for the night. I snuck out to the little community store at our front gates & bought some yummy ice cream for the little guys. I let them make a fort in the living room & fed them ice cream. I finally got a quick chat in with my husband as the kids watch old TV shows. Batman & Robin was the last I remember hearing. I woke up around 10PM turned off the TV & made everyone go to sleep. What a day to say the least! I knew it was going to be a crazy day- but I had no idea how worn out it would make me feel. So glad today is gym time for me & the pool with the boys if the sun pops out. Nothing else at all! Saturday I am looking forward to the day spent hiking around Mt. Rainer with my friends family & my boys. I hope everyone has a safe holiday weekend & get's to rest.
Now for the picture I took before orentation so my husband could see how much both older boys had grown. They are both taller then me now & it's a little strange for us all. 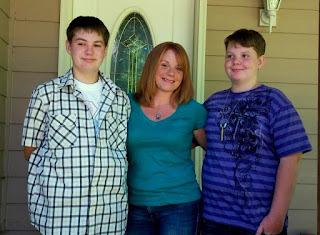 My Freshman in the white & my 8th grader in purple. Where did my babies go?
Posted by Amanda at 8:18 AM