The Sun Shined Down

A lot of you may  be a bit tired of my posts lately as they are often sad & emotional. But those of you who are military & live this lifestyle know it goes with the territory. When a unexpected death of a friend hits close to home it has your emotions so raw that it often times consumes your daily thoughts. As you grieve the loss of the friend, watch the pain play out in that friends family, & realize your soldier is deploying as well soon. It is sometimes just to much to take in and process. I deal with it all best by jumping in with both feet & helping where I can. My tears fall in the early morning hours as I type this BLOG or read the newspaper articles posted by friends & family members of our friends tributes.
If you read yesterday's post you know we where able to attend the Memorial service for our friend Cliff. We are lucky enough to have some great friends who volunteered to watch three of our boys & our oldest son went with us to Spokane. I have traveled to Spokane, WA many times in the past but never with just Paul & one child. It was a long uneventful van ride over the pass. We laughed at a few silly jokes & had some conversations. But for the most part we where all sad & dreading what was to come. Not dreading because we didn't want to be there , but because I think none of us had really stopped yet to say our Goodbyes to Cliff. Hunter is a close friend to Cliff & Sam's son Dale. So he asked to go to support Dale & I was so proud of him. The night before the service they stayed up late in the hotel lobby playing Trival pursuit & watching movies in the room. They laughed & joked around in a teenage boy language that only they could understand. My husband & I often times shake our heads at their conversations & wonder "what in the world are they thinking?". But it calmed both their nerves & that was the point of Hunter being there. To help a buddy out as he has seen his dad do so many times through out the years. I was a very proud mom considering he woke up with a bad stomach ache on Saturday morning. He ended up vomiting a couple times before we left for the Memorial Service. But he put on a smile & continued to chat away with Dale.

We woke up to a beautiful blue sky & sunshine on Saturday. It was so gorgeous it almost seemed strange that we where all so somber & not excited to enjoy the much needed sunshine. As we waited outside for the Beattie family to come down to head to the funeral home,Paul & I enjoyed the cool breeze on the hotel patio. I snapped a quick picture of Hunter & his dad as I am beyond sentimental at this point. I have the worse case scenarios of Paul's upcoming deployment on repeat in my brain.I wanted a picture of the two of my handsome men together one more time before our soldier leaves.So I took a quick picture with my cell phone, not the best quality but I still love it! 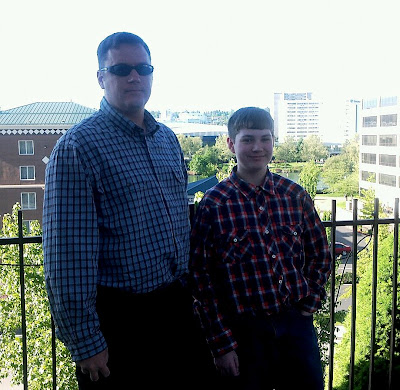 The whole group was finally dressed & ready to head out for the services. We followed the family to the funeral home & then we headed to the church where the actual ceremony would be held. We where just in time to get behind the Patriot Guard Riders
who where going to set up in front of the church to honor the family. The sound of all those Harley's & other motorcycles was amazing! There had to be at least thirty to forty bikes with riders on them all there to honor Cliff & his family.  We where so happy to see them & I was able to snap a few pictures of them & a short video. 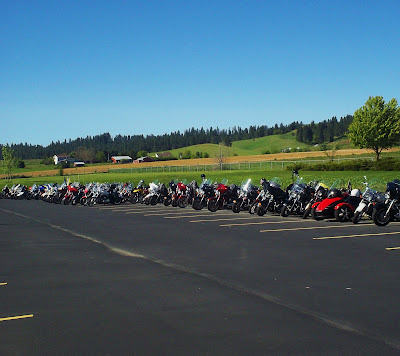 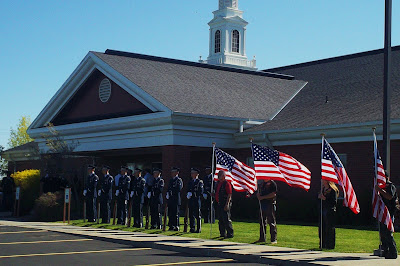 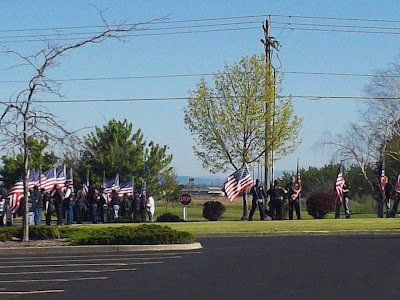 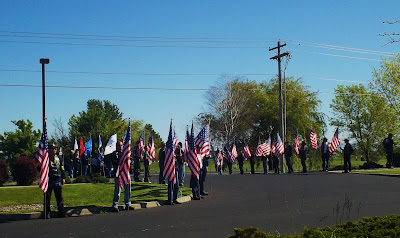 The pictures really don't do justice to the scene of the beautiful American flag waving in the breeze under the sunshine. It was so overwhelming to all of us there military & civilian alike. I noticed that even the golfers who where across the street playing a few holes stopped to take their hats off place their hands over their hearts as the family arrived.We all gathered inside the church for a beautiful & touching service that was filled with laughter along with tears. The stories told often made me laugh out loud as my husband & I nodded our heads that yes that was really something Cliff did or would do. It was nice to let the tears finally flow & say goodbye. As we went outside to finish the service with his family in the sunshine poor Hunter my oldest was feeling very sick.He almost passed out but thankfully quickly made his way back into the church to get a cool drink of water & sit down.As soon as he could he came right back outside to Dale & got him smiling again. We hugged our friends & got ready to return home as Paul had to be back for work.
The trip home was quiet as the guys fell asleep on me as I drove along. I enjoyed the radio & just drove. We came to a scenic over look that I have passed many times & I pulled in so we could stretch our legs a bit. Another couple who was there snapped a quick picture of Paul & I together. It looks a little funny but I had already changed into my comfy clothes for the five hour drive home. Paul had chose to just stay in his clothes he wore to the service. 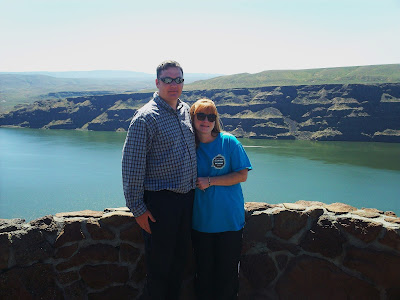 I love the picture even if it looks a little strange. Paul is smiling & I am relaxed yet exhausted all at the same time. We stayed about ten minutes then hit the road again. Once we got to our neighborhood & collected the other three children from our friends we sat down to just relax. I wasn't sure if I sat still to long I'd be able to get up so I managed to find things to do until about 9PM then I crashed hard in the bed. I am not even sure what time Paul came to bed, I just rolled over at some point & he was there. Normally we would be up & getting ready for church this Sunday. But my eyes are still exhausted from the tears & the drive. I will probably need a nap at some point today. So we are just taking the day to relax & enjoy the sunshine that is still hanging around.Paul may have to work today but we are keeping our fingers crossed that he doesn't. We would love to take the boys down to the lake to fish & swim later today. I ask that you all continue to keep the Beattie family & the Mora family in prayer as they continue to grieve over their loss. I am praying that I have a much calmer week as we are heading into the final two weeks of school for the kids. We are all so ready for summer, but dreading it because Paul will be gone. As I've said in the past, time is like a double edged sword for military families. Either it is moving to fast toward another deployment or to slow as we wait on our loved one to return home.
Posted by Amanda at 6:57 AM

Too true about the military time line. Much love to you, your family, the Beattie family and the Mora family. ((HUGS))