I really should have known that yesterday was going to turn into a medical circus from the moment Jeremy refused to let them put in his IV for his laser surgery. He hasn't done that in almost four years! He is usually the happiest ,go lucky patient in the world. Not yesterday - no sir! He wasn't having anything nice to say to the anesthesiologist at all! After I finally talked him in to holding still he let them stick the IV into his hand but screamed until the gas knocked him out!

The surgery went well & he woke up screaming for a few minutes then fell back to sleep. The doctors wheeled him down to recovery & we where met by an older nurse. As soon as she started talking to me & asking questions I got a feeling in my stomach she was not the best nurse for us today. But unfortunately at Madigan you can't just switch nurses with out cause so I just let Jeremy sleep for awhile & went with the flow. I got to catch up with a couple of nurses & doctors that know us as we are "frequent flyers" so that was nice. Then they asked me to try & gently wake Jeremy up so we could get discharged if it went well. I was able to wake him up with only a few tears & the request to go home. He then noticed his IV was still in and very politely asked the nurse "can you please let mom take this out?". I smiled & said "I think we should let your nurse take the IV out so it won't hurt. Mom doesn't know how to take IV's out.". Well that cranky old nurse rolled her eyes, sighed & said loud enough for Jeremy to hear " I don't know why you parents tell the kids we can take the IV's out with out it hurting! Now when it hurts he is going to be mad!."  I was so SHOCKED I just stared for maybe thirty seconds, but just long enough for Jeremy to let her know what he thought. He looks at her and screams at the top of his lungs " NO,NO, NO, you are MEAN!! I DON'T Like You!!"  I was trying not to laugh but was thinking GO JEREMY!! Immediately this really nice Captain named Ken stepped in as she walked away murming under her breath. He asked Jeremy what was wrong? Then he preceded to go out of his way to take Jeremy's IV out very slowly & wheel us all the way out the door to our car. Turns out Nurse Ken was the guy in charge that day, so I hope he let cranky nurse have it when he got back to the recovery room!

Off we drive away home thinking YAY we are done for the day! I promised Jeremy cartoons all day & 7-up. We get home relax & wait for his brothers to get home from school. Everyone arrives home all seems well for the moment. We make Jacob's birthday dinner & right in the middle of eating Jeremy sits straight up on the couch. He starts crying big alligator tears & saying that his lungs hurt! I go check & when I touch his chest he howls. I call the clinic & they are closing because it's 5:30PM so they refer us to the ER . I call & they say we can either wait to see if it get's worse or drive back to get him looked at now. I chose to go back because Jeremy rarely complains unless he is really in pain. I know this will most likely mean a long ER visit so I grab snacks for Jeremy, his blanket, stuffed wolf, & a new book for me. Change him into his Pj's & off we go to Madigan, again.

We arrive & get triaged pretty fast due to Jeremy's swollen face & earlier surgery. As soon as they realize not only is he having chest pain he has Sturge-Weber we are in super fast! The hear a crinkly popping noise when they listen to his lungs so we get to go get a chest X-ray. They see two small spots near his heart & on his neck. So now we get an EKG- something new for Jeremy. It doesn't look right so we are off to get a contrast Cat Scan.Well this may seem fast but it's not. By the time we got the Cat scan it was 9:00PM. We then had to wait for every doctor in the ER to come feel the "bubbles" in Jeremy's neck before they decide he needs to be admitted over night for observation. The cat scan showed bubbles around his heart of pockets of air. They believe it is from the coughing he did when he was waking up from the anesthesia after surgery. He also had one bubble of air in his throat that's apparently pretty rare for a child his age. Then you throw in that not many doctors have ever seen a patient with Sturge- Weber & it was full on INSANITY until 1:30 AM.

Jeremy & I finally got to the fourth floor & asleep around 1:30 Am only to wake up at 5:15AM. He was starving poor guy hadn't eaten much at all in almost twenty four hours.We ordered some breakfast & the madness ensued again. When I said one medical student could take a feel it turned into twenty-five doctors at one point in Jeremy's room. We had ENT, Surgery, & Pediatrics. Jeremy had finally had enough & was still waiting on his food.. He rolled over & refused to cooperate anymore. I suggested everyone wait until he ate & they all cleared out. His food arrived in the shape of Mickey Mouse pancakes, sausage,banana, & chocolate milk. He was so hungry I had to beg for a bite of his banana! Have I mentioned they had NO COFFEE anywhere until I asked for some. How nuts is that!!

He finally settled down & a good friend brought me starbucks & some snacks. She visited with us & watched Jeremy get another EKG. Another friend brought him up a new toy which provided some much needed entertainment at this point. We finally get to talk to all his doctors & agree on a care plan. We got released & are finally home. I am so sleep deprived my head hurts. Jeremy changed out of his Pj's & is watching a movie on the couch. We have two more appointments tomorrow & one new cardiology appointment in a week. All I want to do is curl up in my bed & sleep for a whole day straight. Luckily only the older boys will be home shortly from school. Jacob lucked out into a free afternoon of pizza & fun at Charlie Safari with his friend who is moving on Monday. Thank goodness for that, because I have no energy at all for all of his energy that I know would walk through the door. I am so grateful for all the friends who helped with the kids, bringing coffee, toys, & offering to cook dinner. We really are blessed to have a wonderful support system. Thank goodness- Paul was able to be here & get home to the boys last night. I hope it is a slow, boring , uneventful rest of the week- so please pray for that. I have no energy or brain cells left after the past three weeks to do one more emergency at this point. Here is a quick picture of Jeremy enjoying his Mickey pancakes this morning. I am off to take a nap. 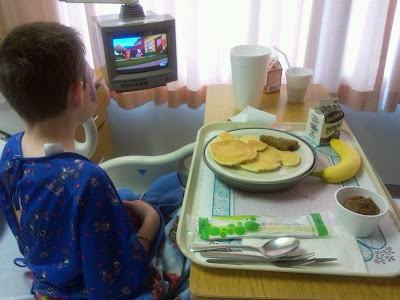