You get a double post from me today & I know you are so excited!! I was going to wait to post tomorrow and remembered Jeremy has Pre-Op appointments spread out all day. Madigan can never do anything in a quick timely manner, but I am not complaining because they take great care of my little man! Any now back to the double posting today.
Last night my youngest was all into the ARMY dress up thing to look like his dad. They had Boot Camp Field Day at his school & he came home with camo sun glasses & dog tags. My soldier has a huge green duffel bag full of his new Army gear laying in our living room floor. It has been there for about two weeks, not that I am counting  ;0)  Jacob decided to show us how big he is getting since he is four days from turning 9 years old (not sure how that happened so fast). He sat on the floor & scooted into the arm straps & hoisted himself up off the floor. He had a huge grin across his face as did Paul & I. I was instantly reminded of when my older two boys always use to play in Paul's gear before his first deployment to Iraq in 2003. I jumped up grabbed the camera & snapped away so I could have them in my old age. 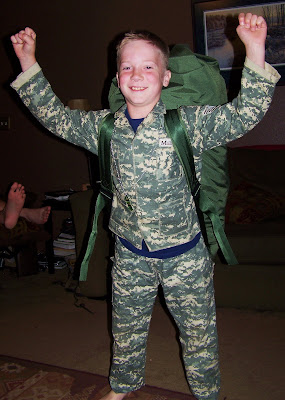 He looks so much like my husband's pictures from that age. 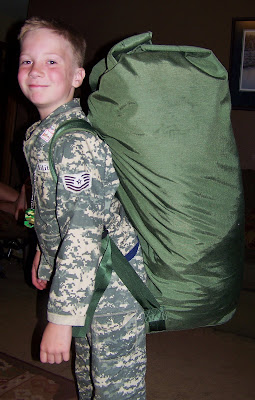 Proving he was finally bigger then dad's duffel
Well this afternoon I was feeling nostalgic & was looking through old scrapbooks for the pictures of Hunter & Matthew dressed up. I laughed at the pictures & marveled at how fast time seems to have gone. They are so big now & looked so small in those photographs. Most of the pictures where glued down so I scrambled to my computer in hopes I had at least one saved. The PC in our bedroom is old but not in use when Paul deployed in 2003. I was so happy to see it did however have the Homecoming pictures in 2004 that I thought I'd lost. It also had a couple pictures of Matthew & Jeremy playing Army dress-up. The only one of the boys who never played Army was Hunter my oldest. Really no surprise there, but I thought for sure we had at least one picture, nope nothing! 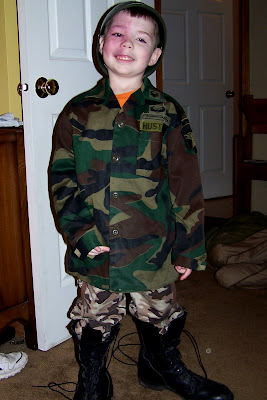 Here is Jeremy all dressed up 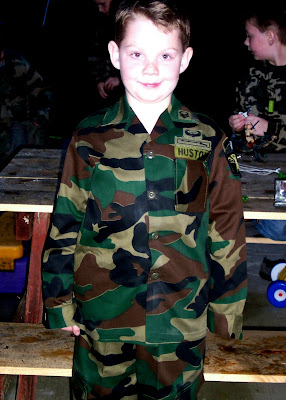 Here is Matthew at his Army Birthday party. Yes we know the rank is upside down in both pictures. But we think it adds to the cuteness of the photograph. It is a super long story on why it is upside down that I can't BLOG it all out- so just go with it- we did.
Anyway this was my stroll down memory lane today. I enjoy pulling old pictures out & looking at how far Paul ,the boys, & I have come. It's hard to believe we have been doing this Army thing for 17 years together. I look forward to whatever Army adventures lie ahead.......I think. Maybe I shouldn't type that out, they may do something crazy with us!
Posted by Amanda at 2:09 PM

Email ThisBlogThis!Share to TwitterShare to FacebookShare to Pinterest
Labels: Deployment, dress up, kids