Reflections on One Year Ago

Excited, nervous, scared,exhausted, & grateful these where just some of the mix of emotions that where going through me this time last year. On this day in May 2010 I had barely slept due to all the conflicting feelings I was having. My husband was finally coming home after 9 months in Iraq! I had my hair,nail, & toes looking as good as possible. The house was as clean as I could get it with four boys & two dogs running around behind me. It felt like I was going on our first date all over again after seventeen years together. I had no idea if my husband would be staying for only the allotted R&R two weeks or for good? We had been told there was a possibility since he had done his Change of Responsibility in Iraq they  might allow him to remain home early to find a new job on post. I didn't tell the kids as I didn't want to get their hopes up as you never know in the Army what can happen. Things change on a dime all the time.
As I sit here today it is hard to feel like he has been here twelve months already. The time seems to have flown by so quickly.It turned out that he was able to stay & change units to a new job that was suppose to be undeployable. Of course we learned after he was home only six short months that was not to be. The Army had changed it's mind & he would deploy again in 2011. The emotions I have running through me again today are some of the same- nervous,scared, anxious, & a little anger. I know this is normal as the deployment is getting so close now.  We anxiously watch the days fall away on the calender at what seems like an increasing rate of speed. I will try to remember that I have done this before & it all worked out OK. That I became a more independent successful wife & mother for my family. We will survive another deployment no matter how much it hurts from the loneliness at times. I will try to remember those moments of sheer joy I will get to experience again as he comes home to us on R&R and for good at the end of the deployment. I will not dwell on the negative for long but move forward & make new memories for my children. It doesn't mean I won't have days of crying,stress,& every emotion in between. I just hope that I can stay focused & move past them . It still just amazes me that it's been a year already.I am so blessed to have had this time as a family. I will not be sad today I will thank God for allowing Paul to come home safe to us last year. 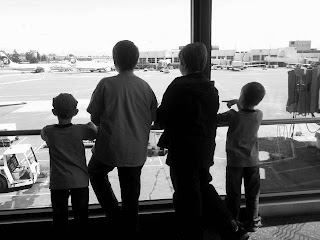 Waiting for their dad to return after nine long months in Iraq. 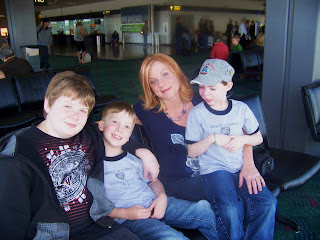 So anxious & excited we arrived two hours early to wait. 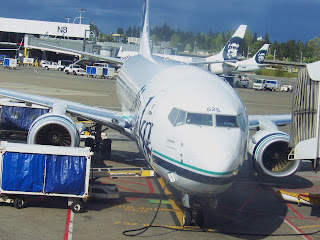 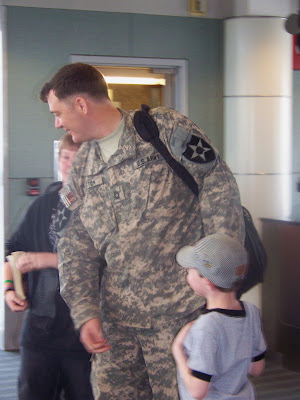 The boys rushed to him! 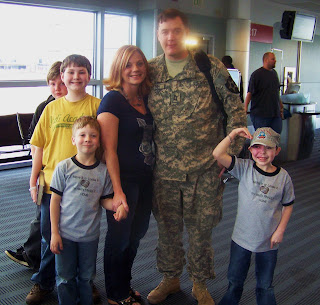 We are a Family once again.
A favorite quote I will keep in mind for the upcoming months.
"What lies behind us and what lies before us are tiny matters compared to what lies within us."  ~Ralph Waldo Emerson