The All American Saturday

I am still here & alive I just didn't have a lot going on this week to BLOG about until yesterday. We woke up to a gorgeous Sunny sky for the third day in a row here in Washington. What a treat! The older boys where gone sleeping over with various friends. The house was nice & quiet as I thought about what to do before the last Soccer game.

My youngest woke up & we decided to tackle the grass,weeds, & flower beds for a couple hours. He did an amazing job with his spade at helping dig out some huge weeds. I am NOT a gardener at all!! I usually kill perfectly fine plants & flowers until I get a hold of them. My mom on the other hand can make anything beautiful,I  didn't inherit her green thumb.We worked side by side for almost two hours of weeding & sweeping porches etc. He was cute when we planted his packets of Marigold seeds in a pot. I sure hope he has better luck & they grow for him. I did use Miracle Grow potting soil in hopes that would  help. I forget that he is only eight going on nine some days. He tries so hard to keep up with his older brothers all the time & act so tough. But yesterday in his sweatpants with bright yellow rubber boots,a pair of mittens because he misunderstood when I said get some old gloves to wear for weeding. It was nice to see that little, cuddly ,sweet boy that I love so much & that is growing up way to fast.

Soon it was time to change, shower, & leave for his last Soccer game of the spring season. The two boys with Paul & I piled into the van , off we went on the beautiful spring day! It was already 65 outside & everyone was in a good mood.We arrived & hoped the boys would have a good last game as their record was only one loss all season. They started off strong & never stopped! It was wonderful to watch every single boy on the team score a GOAL!! They where all so excited & they WON again! It was a great way to end the spring season. 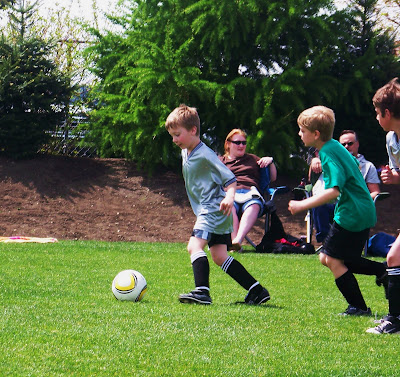 On his way to score a goal! 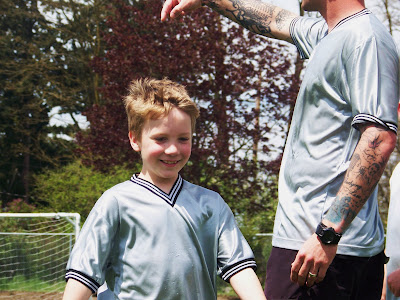 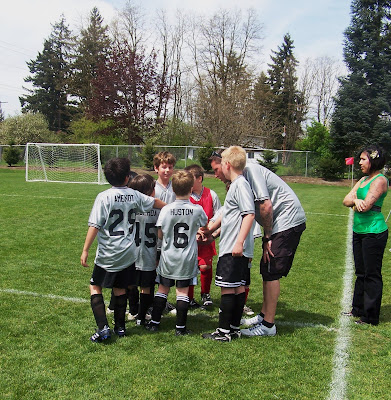 His good friend was playing a Baseball game at the same park so we stayed to watch for a little while. 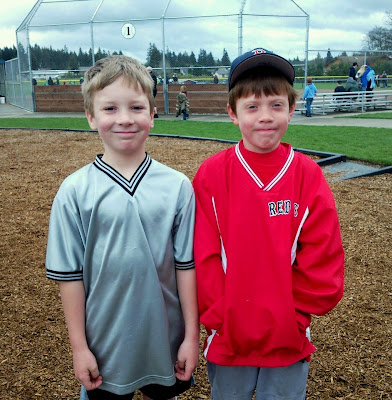 These two always crack me up! They both like to watch the others sport but admit when asked they have NO IDEA what is going on during eachother's games! We will miss our Baseball friend as they prepare to PCS soon. It is my youngest first time to have to say "see you later" to a really good friend.
After the sport filled afternoon we all headed home & laid around for the rest of the afternoon. Then I got a much needed  mommy break with some friends. As the time of the deployment is coming faster & faster I needed this a lot! We all chose to go see the movie Bridesmaids, which was just AMAZING!! It has a lot of the cast from SNL & one from the office. We laughed from the moment it started until we walked out of the theater. It is a very raunchy,over the top humor at times, that had me snorting as tears rolled down my face with laughter! It was just what this army wife/mom needed to de-stress. The hysterical scenes that where played out had the entire theater roaring! It is a MUST SEE movie pick if you need a really good laugh! I enjoyed my huge tub of popcorn with m&m's sprinkled inside & all the glorious laughter. We walked out to our sunshine having been replaced with a torrential downpour of rain falling  from the sky. Back to our usual PNW cold, wet weather. But nothing could put a damper on our moods after having such a wonderfully relaxing Saturday.
Here is the movie trailer for you all to catch a glimpse . I hope everyone out there has time to relax & enjoy the rest of your weekend. Now I am off to enjoy my second cup of coffee & listen to the rain,it is actually quite a pleasant sound.
Posted by Amanda at 7:15 AM