Early before sunrise this past Sunday I got up and moving to go run my first ever 12k run. It was freezing cold 38 degrees outside . I was nervous & excited. I had not been able to prep with much running over the past two weeks like I had hoped. I picked up Ashley my regular running partner all decked out in blue. Not only where we wearing our wear blue gear for the fallen but we also decided to be blue elves! Ashley made us some nifty little blue felt elf shoe covers and we wore our blue Santa hats. 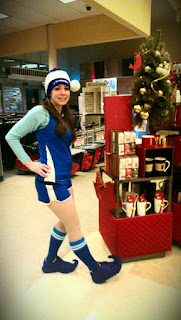 Here is Ashely modeling for you all. I chose not to wear the tights with our blue shorts. I went with my capris, it was just too cold! After picking up Ashley we met Dana at Safeway & hit up Starbucks our standing pre-run ritual to fuel up for our hour plus drive to Kirkland, WA. 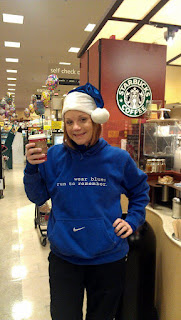 Once we arrive on the waterfront the temperature had dropped to 35 degrees with a strong gusty wind. To say my teeth where chattering it putting it lightly. I prayed at this point as we pinned our bibs on that I warmed up fast when the run started. We hung out for about an hour before the race taking a few pictures to remember our first ever 7.3 miles in the freezing cold. 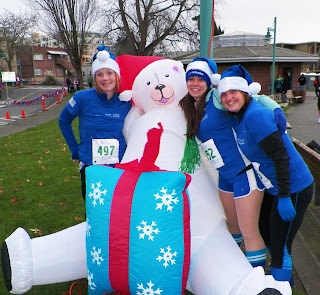 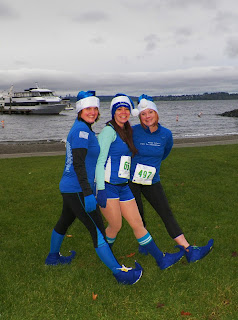 We also hung out in front of the bathroom because the wall blocked the cold wind. We met some other elves as well as a regular blue supporter. When the 5K finally started we where ready to get in line for our race.

The first mile was as usual all about my breathing. With the cold hitting my lungs it was hard to focus on much more then just moving to stay warm. As we rounded the first corner we where hit in the face with our first of many long hills. We had looked at the course map we had only noticed one hill we thought was at the end of the route. I was like no problem I got this because I was not tired yet. I trucked right up that hill no problem. By the time I reached the top I was already at mile 2 and my legs where nice and warm- I was ready to run.
I looked around and realized I had lost Ashley & Dana somewhere in the huge throng of runners. Over 1600 runners had signed up so I just kept moving forward.
I made it just fine for the first 4 miles of A LOT of Hills!! I had never run so many hills at one time in one run in my whole life. By the time we reached the water station at our 6k mark I was exhausted mentally. I was so ready to call it a day but I swished my water and kept going. it felt like I was doing a snails pace at this point. But thankfully I had found one runner another female that I paced behind. She didn't drop off until mile 6, uggg. Then I was frantic trying to find a new person to pace. I thought I was on my own when I hit mile 7. My legs where jello and my head was done! I stopped for a few seconds only to hear a voice from behind yell at me "oh NO, you are NOT QUITTING!! I've been following you all morning you ARE FINISHING! MOVE!! You GOT THIS!". I had never seen this lady before but she scared me so bad I made my feet move putting one foot in front of the other. She ran with me and we both crossed the finish. I told her thank you then tried to stop shaking. I was exhausted!
I went to grab a coconut water & looked frantically for the bananas. This was the only negative comment about the race set up- I wish they had all this right at the finish. I had to wonder around while shaking to find the bananas I so desperately needed to refuel. By the time I made it back to the finish line Ashley had just crossed. We got her set up with water & food then waited for Dana. I started shaking so bad from cooling down that Ashely ran to get our backpack so I could put my sweatshirt on to try to stay warm. Dana showed up and I was able to snap her picture on my cell as she crossed. 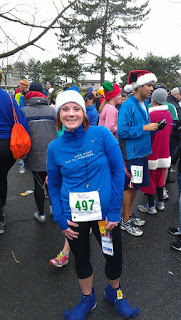 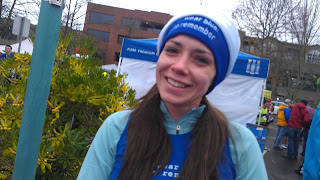 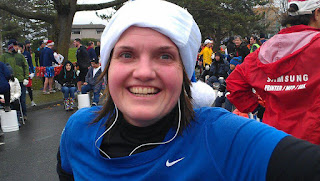 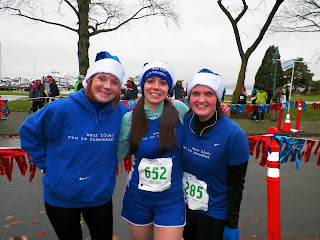 All three of us so happy to be done & so  hungry!

We discussed our run, the crazy hills and how we where sure we would never finish. I shared about the woman who I thought was going to drag me across the final leg of the race. Ashely shared that her head gave out on that first hill and that is where I lost her. Only to have her get to the top and give herself a pep talk. Dana shared how she puked around mile 6.5 and a nice lady rubbed her back through it so she would not stop. It was most definitely a mental run for all three of us to finish. But I am so excited that we all did! I now know I can run 7.3 miles with out stopping if I want. That my body is capable of such distances as long as I think I can. I am excited to have a nice long running break until 2013.

My next run I hope is not until March, the Hot Chocolate 15k so 9.3 miles. I have plenty of time to rest & prep to get my head back in the game. This of course is all leading up to the Seattle Rock "n" Roll Half- Marathon I signed up for in June. Did I forget to  mention that for Christmas I asked my parents to pay for my half registration- yeah I may have lost it folks! 13.1 miles in downtown Seattle surely means more of those dreaded hills! At least I have a few friends talked into running it with me so I'm sure it'll be another fun filled day. Then I can mark it off my bucket list! Turning forty- run a half, yep I'm crazy but only half-Crazy-haha!
Posted by Amanda at 8:21 AM