It's been a minute since I wrote about the puppy updates this week. Sorry folks, but it's like having a toddler in my home again. An unpotty - trained toddler, uggg. I've been working hard with Balto on going to the door so we know when he has to go outside. Some days it seems like we got it down pat only to have evening accidents. I think the evenings are harder because I'm exhausted at that point. All I want is to sit in my chair and relax like the good old days before puppy arrived by 7PM. There will be none of that so called relaxing while he is in the house. Don't get me wrong we are having a blast with little man, but it's a whole lot of work.

He has been doing so good on our little outings that I can't really complain to bad. He made it to Jeremy's school several times. We took him to Boy Scouts on Pinewood Derby night & he was awesome! That gym was loud and crazy with little boy excitement. He laid by me or Jeremy & only barked at the very end. He was good for two hours! 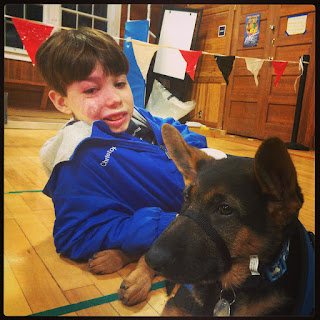 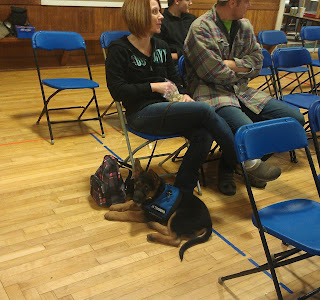 Panzer is tolerating him most days. Sometimes he is fed up with the sharp puppy teeth, but has done relatively well considering his world was turned up side down. We are all adjusting and just enjoying this time with little guy because April 11th will get here way to soon. That is when he goes to our puppy raiser in Nevada.
Now you may wonder as well how has having puppy worked into my workout routine. Not so good-lol I ran a couple times this week but can't leave him in his crate for more then an hour right now. Thankfully my son got sick two days this week. I know I was actually glad I had my fourteen year old home to puppy sit so I could sneak out to do errands. Poor guy didn't mind though, he laid on the couch & took him out when he needed. While mom got a much needed puppy break. I squeezed in a few workouts but not as much as I usually manage. Monday starts running boot camp since I am officaly four weeks out from my first 15K. My Saturday run of 5.92 miles was hard and by now it should not have been.
We are all adjusting and super happy to have Balto. But this mom will be even happier when he figures out how to sleep past 5AM & potty outside. Have a great Sunday everyone. I hear there is some football game today- but since the Bears aren't playing not sure why anyone would watch-hehe 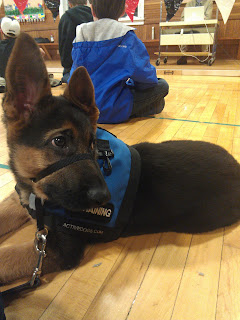 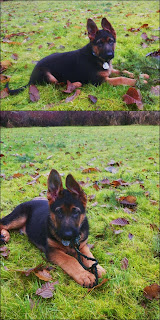 Balto will get there! It is like having a new baby in the house! Cute yet work ;D

Keep up the good work!